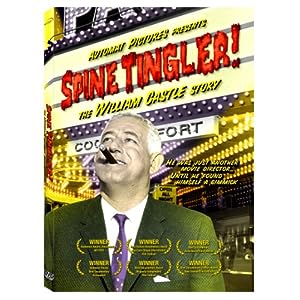 On the Friday before Halloween, I can only imagine the difficulty the programming folks at TCM had in selecting their TCM Underground feature. The last hundred years are littered with worthy candidates, many of which we've reviewed here at Nerds of a Feather. But they did something interesting, and this is why they get paid the big bucks (if in big bucks they are in fact paid): they selected Spine Tingler! The William Castle Story, a documentary about the Hitchcock of B-movies.

I love William Castle, but it turns out I didn't know very much about him. The documentary itself is - as TCM pointed out themselves - little more than a feature-length DVD special feature...let's just say it's not exactly hard-hitting. But in the case of a man who attached joy buzzers to the bottom of movie theater seats and took out insurance policies against people dying of fright during his tongue-in-cheek horror movies, I think such a treatment of the man's life is very much appropriate. It's a celebration, and a well deserved one, at that.

Castle produced and/or directed movies such as The House on Haunted Hill, The Tingler, 13 Ghosts, and, ultimately, Rosemary's Baby. In the tradition of the men who built Hollywood in the first place and founded the studios Thierry years earlier, he was orphaned as a child a d found his way into the picture business on the strength of chutzpah and not knowing enough to know what he didn't know. He crossed paths with Orson Welles in New York, became a contract director under the legendarily terrifying Harry Cohn, and in his heyday took an approach to promoting his films that Alfred Hitchcock became envious of and eventually copied, in his own signature way. Castle made a celebrity of himself when directors were largely unknown to the general public, and innovated gimmicks for his films that have become the stuff of legend. But he was also a man driven by fear, who felt he was only as good as the box office on his last picture, an unfortunate and heartbreaking realization about a man who inspired and accomplish so much and so many. But that's show biz, folks.

Bonuses: +1 for the interviewees, who include John Waters, Roger Corman, among Landis, and Forrest J. Ackerman; +1 for legitimate insight into the man and his career; +1 for managing to capture the fun and joy of experiencing these movies - whether in a 1950s movie house, on late-night TV, home video, or otherwise.

Penalties: -1 for the poor green screen work on many of the interviewees

Cult Movie Coefficient: 8/10. Well worth your time and attention.

[See explanation of our non-inflated scores here.]
Posted by vkotrla at 12:30:00 AM