This week's books featured the return of two titles that I didn't realize how much I missed them. Dept. H and Southern Bastards are two incredible series that nobody should miss. Even if you aren't a fan of high school football, the twisted world that Jason Aaron and Jason Latour have created for this football team in Alabama is a little too believable and horrifying. Matt and Sharlene Kindt have produced one of the most beautiful books that I have ever read, and their attention to detail is unmatched by other creators. It is a good time to be a fan of comics and there are some amazing titles that should be able to bring new fans into the fold. 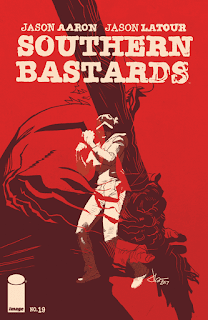 Pick of the Week:
Southern Bastards #19 - Holy hell this issue does not pull any punches. I normally try to avoid spoilers in my mini-reviews, but be warned that there are minor spoilers to follow. Coach Boss and the Rebs are losing the game and it seems that his caving to McKlusky may be one of the reasons that the boys are playing uninspired football. McKlusky surprises the team to collect his money at half-time, only to be delivered a briefcase full of dog shit and a starring role in the half-time speech that rallies the players. Meanwhile, Earl Tubbs' daughter has tracked down Coach Boss and is ready to get the revenge she so desperately wants. The ending had my jaw on the floor and I cannot freaking wait to read the next issue.  In the meantime I think a re-read of this series is in store.

Dept. H #22 - We are only two issues away from the conclusion of the series and finally uncovering who killed Mia's father. The crew finds themselves in a very difficult situation, as Aaron is holding onto the cure, but is a substation above everyone else without a functioning sub. Given the condition of the substations and the sabotage that has occurred, only one member of the team can attempt to surface with the cure to the epidemic that is currently ravaging the people on the surface. Tension is at an all-time high, yet Matt and Sharlene Kindt share some truly beautiful scenes with us and it highlights the relationships between this diverse cast of characters. The watercolor approach this book has is mesmerizing and the inclusion of a water meter on the page borders is absolutely brilliant. One of the best series I have read recently and I am absolutely looking forward to its conclusion. I was especially excited to learn in the letters section that the world of Dept. H shares a common universe with Mind MGMT and Revolver.

Ducktales #5 - I am loving this series from IDW and feel that it is adequately filling in the gaps while my family and I wait for another season of Ducktales on Disney XD. The stories in this issue feel like classic Ducktales, but with a bit of a modern twist in terms of humor. I thoroughly enjoy that I can hear the voices of the characters in my head as I read each page and enjoy sharing this series with my kids. One of the best all-ages books on the market.

Star Wars Forces of Destiny: Ahsoka and Padme - I am still enjoying this series and felt brought back to the Clone Wars animated series in this one-shot. I always enjoyed the dynamic between Ahsoka and Padme, and this issue played well on that and their love of Anakin. It might have been better to give each of these characters their own issue, because it felt that both characters deserved more of their lives outside of what we have already seen shared. Not my favorite in the series, but an enjoyable issue that I will once again recommend to Star Wars fans of all-ages. Still hoping that there are plans to publish these stories as a collection.