This weekend I will be making a short drive down I-35 in order to attend PAX South. This will mark my second trip to this convention, and I am curious to see how the tabletop side of things has grown. With Penny Arcade launching its own tabletop convention, PAX Unplugged, in 2017, I am hopeful that my weekend will be full of playing games. 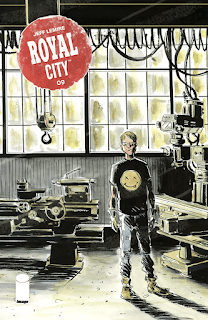 Pick of the Week:
Royal City #9 - Royal City is an absolutely mesmerizing series and I love how Jeff Lemire jumps around various timelines in the story to give us a good view of Pat and his family. In this issue, we get a sneak peak into the time when Pat decided that he wanted to escape the trap that ensnared most residents of Royal City. Pat desired to leave the town one day and avoid a lifetime of operating drill presses in the local factory. Lemire's books shine when he focuses on interpersonal relationships and Royal City is no exception. You are immediately drawn into the lives of this family and feel immediate concern for each member. I cannot recommend this title enough and want to learn more about them and what ultimately happened to Tommy.

The Rest:
Sword of Ages #2 - The second issue in this series from Gabriel Rodriguez's adaptation of the legend of King Arther hits the ground running and doesn't let up. There are multiple story lines emerging and I am very curious to see where everything is headed. The two main plot lines focus on Avalon and her quest for the sword and the rise of Lord Morgan. Not surprisingly, Rodriguez's art shines and I absolutely love the religious skepticism that Avalon has despite her work with the monks. It really paints her as someone I can relate to in this sci-fi/fantasy story that has me hooked.

Star Wars: Forces of Destiny - Rey - I haven't been shy in expressing how much I have been enjoying the all-ages Star Wars books from IDW, but this one felt a little flat. It was a fine story about Rey and BB-8 that filled in the small gap between when she saved the little fellow to when they were forced to flee with Finn. I appreciated her compassion to the creatures on Jakuu, but it lacked the spirit of the Leia story. I will definitely read the other books in this series, just wanted more as Rey is one of my favorite characters.

Daredevil #597 - Matt Murdock agreed to be the deputy Mayor to none other than Wilson Fisk. It is a curious move, but both parties agree as they think it will help them keep an eye on their opposition. While it isn't the most exciting opening to a comic book, even if you love political posturing, things pick up when we learn that Muse has broken out of jail and is targeting Daredevil. It appears he might even know that Daredevil is working in the Mayor's office. Very curious to see how this will play out as we work our way towards issue #600.  I imagine there are some plans for that one.

Darth Vader #10 - Very interesting conclusion to the Vader/Nu showdown. I never thought I would enjoy a battle between a Sith Lord and a Librarian, but the duel between these two is one for the ages. Vader is intent on retrieving a piece of intel from Nu, which turns out to be a list of children who are force sensitive. There is a fear that he wants it to create a Sith empire, and Nu is willing to die to protect that information. Really enjoyable and surprising conclusion to this arc that the readers are sure to enjoy.