Leave it to comic fandom to always find something to rage against when a creator is tasked with something that there can be no correct answer.  Donny Cates, one of my favorite authors I should note, revealed what Thanos' mother intended on naming him until she met him at his birth and lost her mind.  She intended to name him Dione.  According to some definitions, it means goddess and according to some legends Dione is the mother of Aphrodite. Not sure what fans were expecting, but I think that it is pretty cool and I dig it.  Wonder what they will get mad at next? 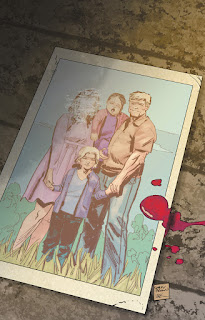 Pick of the Week:
Babyteeth #7 - Holy hell this is a good issue! Not only do we learn more about the Silhouette and the role they have played stopping the Antichrist in the past, but we learn more about Sadie's mom and the organization she is a part of and their role in this business. It was interesting to learn that this organization had assassinated other babies who they feared were indeed the Antichrist. Sadie's mother has taken her, the child, and Sadie's sister Heather into an underground compound in Maine. The Silhouette fears that this is to allow the child to mature and open the seventh seal when she is old enough. It struck me as odd that Heather's mom had an objection to taking the Lord's name in vain and makes me wonder the true intent of her organization and if the Silhouette is who they claim to be.  Speaking of the Silhouette.  Holy shit.  Carl?!?!?!  Really digging this series and even if you are mad at Donny Cates about the whole Dione thing, this book is well worth your time and money.

The Rest:
Goosebumps: Monsters at Midnight #2 - Not sure how I missed that there is a new Goosebumps series, but was delighted to learn that IDW is publishing a new line of Goosebumps comics through a series of three issue self-contained arcs.  What a cool idea!  How does it stack up? It is an absolute delight! Ginny and Mia left their grandmother's house and have become trapped in a horror amusement park run by none other than Slappy the dummy! The art by Chris Fenoglio and colors by Brittany Peer are whimsical and make me wish that there was a Goosebumps cartoon I could watch with my kids. This all-ages book is a must for any Goosebumps fan and I am really looking forward to the conclusion of this arc.

Birthright #29 - Joshua Williamson's epic saga is approaching its end and this issue was an emotional roller coaster that is setting the scene for something big in issue #30.  Not sure if it is the series conclusion, but we are rapidly approaching the finish line. The scenes in which Mikey, now an adult warrior, has to watch the emotional toll his disappearance had on his family was extremely well done and reminded me of why I was drawn to this series. If you haven't read any of this series yet, I really encourage you to pick up the first trade and give it a whirl. Definitely a surprising book that I didn't see coming.

Star Wars: Forces of Destiny - Leia - This one-shot from IDW focuses on Leia's leadership on Hoth prior to being discovered by the Empire's forces. One of my favorite aspects of the new all-ages IDW Star Wars books is its positive portrayal of the strong female characters in the Star Wars universe and the impact that it can have on my kids and their friends. Like the Star Wars Adventures comics, the Forces of Destiny line appear to be a must read of Star Wars fans of all-ages. There is something special in watching Leia struggle riding a tauntaun while sparring back and forth with Han.

Paper Girls #19 - The Battle of the Ages is now in full swing. We start this issue and they are merely in the middle of it, but as it progresses they are deemed enemy combatants. Tiff meets her older self and they realize that they are the only two who can see the giant robots that are currently roaming the town. It also provides a possible way to return to their own time period, but it involves hijacking one of the robots and they currently have no way to secure one. Really enjoying the direction of this arc and learning more about why the paper girls are so central to the story, but Brian K. Vaughan is keeping a lot to his chest and it is unclear when we will learn more about Charlotte, the author of the comic strip, or what role older Tiff and her husband will play.