HORROR 101: Surrounded by Others--Anatomy of a Pod Person 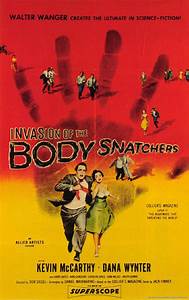 As a child, two of my earliest film-related memories are watching the 1978 version of Invasion of the Body Snatchers and watching the John Carpenter version of The Thing. In both, what stuck with child me was the depiction of a monster who not only could be anyone, but also could be someone that you think you know so well: your crewmate, your friend, your lover. This early exposure to these two films led to a longtime obsession with pod people (which the Thing is not technically, but I’m extending my definition here to any monster who can appear in the exact visage of someone you know and trust). As a child, there was a visceral terror to the idea, because the world was one I trusted. As an adult, while I don’t think pod people are likely, they still strike a certain fear because the concept at the heart of pod people’s terror-making is very much real. In this edition of Horror 101, I’ll be diving into the anatomy of a monster (a thing I’ll do occasionally in this series).

The most famous example of Pod People in their truest definition comes from Invasion of the Body Snatchers, a novel by Jack Finney from 1954—which was made into a film in 1956. In the book, alien spores (essentially) fall on a Californian town. Once there, the spores make pods where duplicates of the townspeople form inside. The pod people retain the characteristics, mannerisms, and even memories of the people they are copying. However, they lack human emotion and empathy. The epidemic is at first misdiagnosed as a kind of Capgras Syndrome (a real disorder in which a person believes their loved ones have been replaced by imposters). Ultimately, the film becomes an examination of paranoia and distrust, as the characters who realize the truth try to warn people who refuse to listen. The film, despite being outdated, retains a frenetic energy to its paranoia. However, the story reaches higher peaks of excellence in two remakes.

1978’s Invasion of the Body Snatchers, directed by Philip Kaufman, stars Donald Sutherland, and heightens both the paranoia and the distinct unsettling terror of the original. One early scene that stuck with me so vividly as a child that I still sometimes flash on it (and which shares a few parallels with what I still consider Ray Bradbury’s most terrifying story, “The Crowd), wherein a crowd of onlookers stares at a body without showing any kind of emotion. The way to try to survive against the pod people involves stripping the emotion from one’s self, so that you won’t be detected—a disturbing uniformity through loss of empathy. The final scene of this film still remains one of the most effectively chilling of any film. One through line that both films retain is their loss of hope—how do we fight against that which surrounds us?

This question continues in 1993’s Body Snatchers, directed by Abel Ferrara. The action of the plot is moved to a military base but retains the underlying premise of the book and two previous films. This, along with the 1978 version, is one of my favorite sci-fi (or horror) films and features a distinctly chilling performance by Meg Tilly. This version shifts its heroes primarily to teens and children—who are consistently disbelieved. An interesting twist that capitalizes on the way youth is often used as an excuse to not trust the word of children in the face of the horrific (a device horror uses often). The film answers the previous question I raised by asking another, voiced by one of the pod people: “Where you gonna go, where you gonna run, where you gonna hide? Nowhere... 'cause there's no one like you left.” This points to one of the most effective aspects of pod people as monsters.

If monsters are often the way we depict “others,” what then happens when the protagonists become the other? When pod people become the majority and they look just like your friends and family, who is the other in this situation and what does that even mean anymore? Pod people, in terms of monster theory, are fascinating because of the way they shift the dialogue from obvious monstrosity to a subtler depiction of both othering and what constitutes a monster. In a world where consistently loss of empathy towards others creates policies that enact violences (see my last Horror 101for a deeper look into violence as a loss of agency), isn’t a person who looks just like your neighbor but without a guiding emotional core or empathy, the ultimate kind of horror? Or, maybe a better question is, shouldn’t it be?

POSTED BY: Chloe, speculative fiction fan in all forms, monster theorist, and Nerds of a Feather blogger since 2016. Find her on Twitter @PintsNCupcakes.
Posted by Chloe N. Clark at 12:00:00 AM