After taking a few weeks off I am happy to return to our regularly programmed Thursday Morning Superhero just in time for one last post in 2017. Upon reflecting on the year in comics, we really had some outstanding books to read, including Redneck, Saga, Dept. H, Paper Girls, and a collection of some pretty rad Star Wars titles. Hopefully 2018 will be another banner year for comics with some awesome surprises. 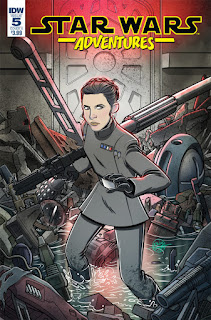 Pick of the Week:
Star Wars Adventures #5 - No book has surprised me more this year than this all-ages Star Wars title. This issue includes the conclusion of The Trouble at Tibrin and another short story about Porgs. The Porgs may have influenced my love of this issue, but in all seriousness this is must read material for Star Wars families. I really enjoyed how the script was flipped and in The Trouble at Tibrin features Leia rescuing a captured Luke from a Star Destroyer. Complete with the trash compactor monster, we are reminded that Leia was a force to reckon with. This short story really showcased how intelligent and fierce Leia was and reminds me that she was a character that was well ahead of her time. The second story in this is all about Porgs! Porgs! Porgs! Porgs! Did you know a group of Porgs is called a murder? How cool is that?  I love Porgs! They are Puffins that were digitally turned into Porgs after filming!!!

The Rest:
Redneck #8 - We are only in the second issue of the new arc and it has already hit the fan. Redneck might be my favorite new book of 2017, and this issue is a great example of why that is the case. The southern Baptist notes mixed with family loyalty and sprinkled with special powers makes for an intriguing read. If you are looking for a horror title to add to your pull list look no further than this series. The creative team of author Donny Cates, artist Lisandro Estherren, colorist Dee Cunniffe and letterer Joe Sabino deliver one helluva book.

Star Wars: The Last Jedi - The Storms of Crait #1 - Not sure if this is an ongoing or a simple one-shot, but this issue is a self-contained story of the rebels attempting to secure a base on the mining planet Crait. Following The Last Jedi, it is natural to feature a story on the mining planet and this one accomplished that task. A fun, if forgettable, issue that I enjoyed and have no plans of revisiting in the near future. Much like the planet of Crait.