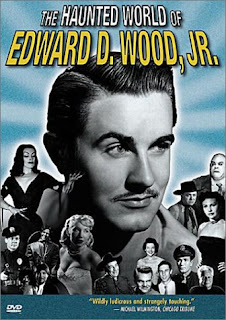 I'm on record as saying I think Ed Wood is probably the best movie ever made about making movies. It came out in 1994, and a year later, apparently to capitalize on the sudden name recognition generated by the Tim Burton movie, the independently-produced documentary version of the same events came out. It is very odd, but also very touching.

If you are not familiar with the events of Ed Wood, it's going to be hard for me to summarize what this documentary's about, but I'll give it a go. Edward D. Wood, Jr. was a World War II veteran who moved to Los Angeles after the war to try to get into the picture business. When the story of Christine Jorgensen — one of the first Americans to openly undergo gender-reassignment surgery — hit the news, Ed Wood managed to land the job of directing an exploitation picture called, I Changed My Sex. Ed landed the job because he was secretly a transvestite, which he revealed to the film's producer. After promising to shoot the movie in three days, Ed wrote a script about the life he was leading, keeping his transvestism secret from his girlfriend Dolores Fuller. Dolores would go on to write hit songs for Elvis Presley and Nat King Cole. The resulting movie, ultimately released as Glen or Glenda? is one of the most incomprehensible things ever set to film. And it stars Bela Lugosi. Ed and Bela met somehow, I guess there are a couple different versions of what went down, and became...probably...friends. Bela hadn't worked in a while, and needed money. Ed would keep Bela employed until Bela's death, and I kid you not, beyond. The three films they made together are widely thought of as some of the worst movies ever made. Also appearing in them are Tor Johnson, a Swedish professional wrestler, Vampira, an out-of-work late-night horror TV host who was the inspiration for Disney's Maleficent and, later, Elvira, and a group of friends, some actors, chiropractors, girlfriends, investors' kids, and whoever else would be in them for nothing. Ed's "masterpiece," which was finished after Bela died, was actually financed by a Baptist church in Beverly Hills, and Ed got the cast and crew to agree to be baptized as a condition of financing.

Phew. Ok, so all that is in Ed Wood, and familiar to anybody who's seen it. But it is remarkable to hear the people who were actually involved tell the story. The filmmakers got EVERYBODY. They got Bela's only son, they got Dolores, and the woman who stole Dolores' part in Bride of the Monster because of a misunderstanding about her investing in the production, they got Ed's ex-wife and step-son, they got surviving members of Ed's casts and crews, they got Maila Nurmi (Vampira), they even got the pastor of the Baptist church that paid for Plan 9 from Outer Space. And things you think, "Well, that probably didn't happen like that," while watching Tim Burton's movie, you find out, no, it pretty much happened like that.

Ed's story was not a happy one, though. He died a homeless alcoholic at the age of 54. While not lingering on it, the movie doesn't skip over Ed's last years, in which he was usually drunk and making pornographic films. Similarly, Ed's relationship with Lugosi has been the subject of a lot of speculation and some recrimination. Was Ed a heartless, exploitative fraud who ruined Bela Lugosi's legacy (a position held by Bela Lugosi, Jr.), or were they actually friends? Did Ed give something to Bela in the legendary but then-forgotten actor's final years that Bela cherished? To hear Ed's stepson recount visits to Lugosi's house, for instance, you might be inclined to think that, yeah, the two were odd but close friends. As the film ends, and each of the interviewees signs off on their final memories of the actual man — not the character named "The Worst Director of All Time," but the actual human being that they knew for better and worse — the movie is profoundly touching. To hear these people express their regrets for not understanding Ed's cross-dressing at the time, for not being there when they felt he may have needed them most, or for some, how much it meant to them that they were with him right to the end...it's moving stuff.

Ed Wood was not a good filmmaker. But he was loved, and he was complicated and frustrating and misunderstood, and when he was gone, he was missed. And for all of its complexity and murkiness, I think his story is a meaningful one, and I'm glad we have it.

Bonuses: +1 for getting all the interviewees they got; +1 for an unexpectedly evocative emotional experience; +1 for being quite frank about topics that were emotionally perilous for some of the people on camera; and +1 for Maila Nurmi's sorry-not-sorry admission that Orson Welles gave her an STD

Penalties: -1 for a little bit of narrative unevenness in terms of who-did-what-when; -1 for being mostly talking heads, but what are you gonna do?

Nerd Coefficient: 8/10. I feel like this is a must for fans of Wood, but also a good watch for anybody invested in independent or cult filmmaking

Posted by Vance K — cult film reviewer and co-editor of nerds of a feather since 2012. For reviews of other documentaries about cult film figures, check out Corman's World and Spine Tingler! The William Castle Story.
Posted by vkotrla at 12:01:00 AM