With the Secret Empire event behind us Steve Rogers is back behind Captain America's shield. While I enjoyed the twist of him working with Hydra, I feel Marvel is sending a signal with this week's issue that they are moving forward with a new chapter. I don't know if that has anything to do with Mark Waid's return to the series, but it feels like an olive branch has been extended to "fans" who haven't been reading as of late. 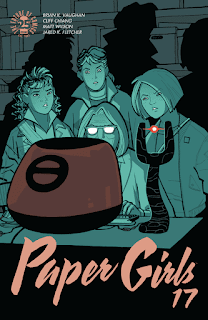 Pick of the Week:
Paper Girls #17 - Thanks to the friendly teachings of Charlotte, the girls finally learn some key facts about the mess they have found themselves in and the readers can rejoice. While it isn't clear why they were selected and what their role will be, they are in the middle of a time war called The Battle of the Ages. After the invention of time travel men called the old-timers vowed to stop anyone trying to interfere with the past or peacefully explore it. Not everyone agrees with this notion, hence the conflict, giant robots, weird aliens, etc. The question remains whether or not the girls should trust Charlotte and the information she keeps on hear orange iMac. Love the nostalgia in this series and really like how we are starting to see the bigger picture. While there is still a lot to unfold, a big weight is lifted for readers of this series and it has me really excited about this series again.

The Rest:
Darth Vader #7 - Now that Darth Vader is in charge of the Inquisitors, the hunt for the few remaining Jedi is in full swing. Sadly Jocasta Nu, the librarian of the Jedi, has been given extra attention. Without spoiling anything, the Emperor has a special plan for her and one that requires Vader's direct attention. One of the tidbits I really enjoyed in this issue is that Vader considers the Inquisitors weak and pathetic due to their lives as former Jedi. He considers their teachings to be a great weakness, but feels he can change them through the force. Even the Emperor considers them severely flawed and is clearly using them solely for his own gains. Charles Soule is doing a wonderful job with this series and it remains one of my top books.

Captain America #695 - It has been a long time since Captain America wielded the shield and a long time since I have read a Mark Waid title. This isn't intentional as he is one of my favorite authors, but something that hit me when I decided to return to this series. Waid pairs up with Chris Samnee for this issue, a one-shot that highlights what Captain America stands for and the importance of helping those in need. A nice touching issue that will move us past the "evil" Captain America who was a sleeper Hydra Agent. I admittedly enjoyed that twist, but am happy to see a return to roots.