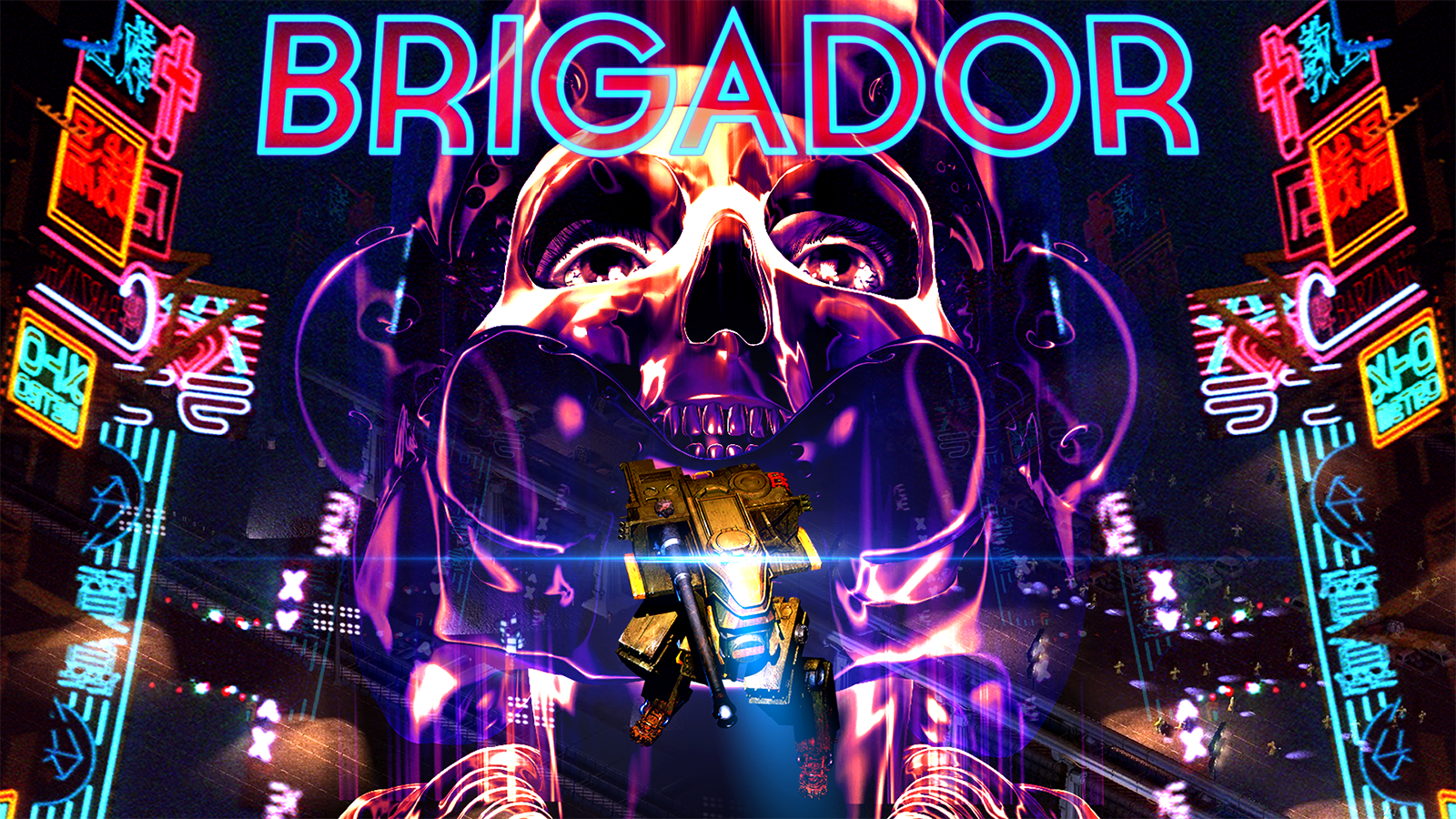 Neon lights, an authority violently overthrown, and buildings that crumble like they're made out of ash under your mech's stomping feet, all to a synth soundtrack. Brigador knows exactly what it wants to be. The good news is that it mostly achieves its vision, with a couple hiccups.

You play as a mercenary collecting a paycheck by completing missions in support of the Solo Nobre Concern. They're offering a ticket offworld if you can help them overthrow the factions controlling the city of Solo Nobre. You'll do this in an isometric action game from a variety of mechs, tanks, and anti-grav vehicles with dozens of weapons.

At first look, Brigador might remind you of the classic Strike series (Jungle Strike, Desert Strike, Nuclear Strike, etc) of helicopter action games, due to the vehicle selection and third-person isometric perspective. That's not a terrible comparison, but Brigador offers a lot more. Not only are there more vehicles, weapons, and pilots, but more depth to the combat.

You're armed with two weapons, and an auxiliary ability. Each weapon has its own fire rates, and their own behaviors. There are the standard machine guns and cannons, but also mortars, lasers, and shotgun-type weapons. Your mouse controls not only set the direction of fire, but also the range of fire, so you can launch mortars over walls, spray smoke canisters in semi-circles or lines, and shoot over or past enemies. This is cool in a lot of ways for the level of control it gives you over the destruction you're going to rain down, but it complicates what is otherwise a fairly simple action game. Instead of just pointing in the direction of the bad guys and firing away, you've got to actually consider their distance and aim so that you're not shooting in front of or over them. If you can't get this and just treat it like any twin-stick shooter, you're going to have limited, frustrating success.

The campaign mode offers a couple dozen missions with premade pilot/vehicle/weapon combinations that are fun, but it's kind of training wheels for the operations mode, which is much more freeform. Operations mode lets you select any pilot, vehicle, weapon you desire, and go on a multi-map romp with an open set of objectives and building difficulty. Early options and low level pilots offer easy difficulty and a couple maps to stomp through, but unlocking high level pilots will greatly increase the resistance and later operations become endurance runs to see if you can manage to keep up your health and ammo count across several sprawling maps.

The music of Brigador is also notable for perfectly pairing this dystopian mech action with Makeup and Vanity Set's synth sounds. It's a beautifully drawn game with a moody soundtrack that comes together very well. However, some of the weapon sounds could use some work. In particular, big cannons don't really sound like the size they are. They nail the whirring sound of very large machine guns though, which is great.

Brigador is a great action game after you've figured out its quirks. It'll frequently overwhelm and stomp on you, but rarely to the point of frustration. Your implements of carnage come in a large variety, so there's a ton of action to be had. It's only slightly marred by disadvantaged by doing more than action games of this nature normally do when it comes to weapon control, but that's a gift once you've got the hang of it.

Penalties: -1 controls might put off some people looking for a more simple action game