Microreview [board game]: The Thing: Infection at Outpost 31

Mondo, who is well known for its limited prints and stunning vinyls, is getting into the board game arena and its debut is quite impressive. The Thing: Infection at Outpost 31, puts gamers at the dreaded Arctic outpost from John Carpenter's 1982 thriller The Thing. Sticking true to the source material, players are either a human or are an imitation and the only way for humans to survive is to escape without letting any imitations on the helicopter. This is a great medium to lightweight game that works with experienced gamers or as a gateway game for new players. 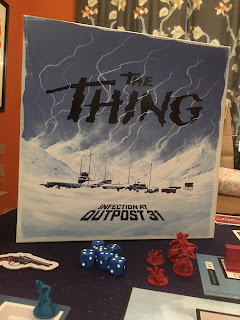 Gameplay:
At its heart, The Thing: Infection at Outpost 31 is a social deduction game. Inspired by games like Werewolf and The Resistance, players have to read social clues from one another to determine who you can trust and who is secretly working against you. One big difference from other social deduction games, the miniatures and the way you progress through the outpost enhance the immersion and gameplay experience. The game supports 4-8 players and takes between 1-2 hours. If you want to learn more about the rules you can watch a snazzy video featuring Elijah Wood!

Players are dealt a blood sample card to start each game to determine who is human and who is imitation. For the humans to win, players must go on missions throughout the outpost, collecting essential gear and battling the Thing. If they are able to collect the necessary gear and are successful in their battles, they enter the final escape phase. The escape phase is where this game truly shines, as the selected captain must choose who is able to ride the helicopter to freedom and who is left behind. If only humans are on board then the humans win. 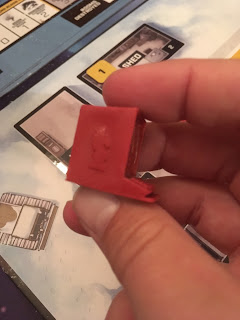 The imitations have multiple paths to victory. By sabotaging missions, they can move the chess computer down the imitation track, destroy rooms to cause the outpost to collapse, or sneak onto the helicopter and bring about the destruction of the human race. The game seems to be skewed a bit in favor of the imitations, which is a good thing in my opinion. 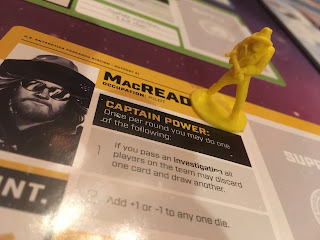 The Components:
Featuring art from Justin Erickson, the board, player dashboards, cards, instructions and box are all beautiful and really enhance the player experience. The spot UV on the board looks sharp and the game insert allows for easy setup and take down. I was impressed with the quality of the sculpt of the miniatures (or movers as they are called in the orientation and regulation manual) and it is a lot of fun playing as Wilfred Brimley or MacReady. In typical Mondo fashion, a limited version of the board game debuted at Mondo Con last weekend featuring a limited print and cover art from Jock. In addition, players get two bonus missions complete with miniatures. It is limited to 1,982 copies and the remaining stock will be sold at Mondo's website at some point soon.

Bonuses: +1 for attention to detail and movie references, +1 for the artwork

Penalties: -1 for repetitive missions, -1 for advantage given to imitations

POSTED BY MIKE N. aka Victor Domashev -- comic guy, proudly raising nerdy kids, and Nerds of a Feather contributor since 2012.
Posted by Mikey N at 6:02:00 AM