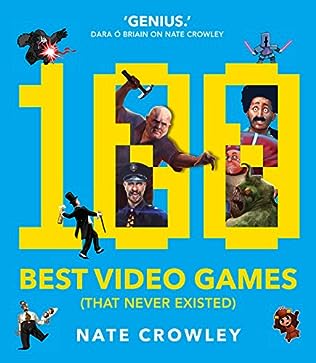 When Nate Crowley tweeted that he’d come up with an imaginary videogame for every like that the tweet received, he probably didn’t realize quite what an undertaking he was in for. I was one of the people who hit like on that tweet and watched as he slowly amassed a gigantic list of game titles that never were. So I was quite excited to see the resulting book that came out of this. 100 Best Video Games (That Never Existed) takes the idea and runs with it. Making summaries of the games (in a review-like structure) alongside date of release, company, and pictures from the games.

Some of the games take punny titles (like Moulin Luge) and go pretty much where you expect them to, while others such as Thomas the War Engine actually feel (if in a hilarious way) like they could be games (where getting dark reworkings is often a go-to tactic). Smaller sections within have themes and lead to some of the better jokes: such as Jurassic Park Accountant being one of the Film and TV Tie-In Games.

The book has a lot of charm and a good sense of playfulness running throughout. I also enjoyed how the pics from the game very clearly matched certain styles and eras of games. However, as with any book like this, it’s not one you’ll read straight through, but moreso find yourself wanting to randomly browse through it and read the occasional entry for the title that jumps out to you. While most of the game names are fun, oftentimes the summary hammers the joke home a little too hard.

The exception to that is my favorite of the games, Bread: The Game, in which the endless onslaught of puns were not only impressive (who knew there were so many bread puns possible) but also overstayed the joke so much that it circled around to being really funny again.

Ultimately, this is enjoyable and a strangely good idea to me, but it’s something that makes a good gift for the gamer or pun-lover in your friend group while anyone who doesn’t fall strongly into those two groups probably won’t find much to enjoy.

Bonuses: +1 for some very good puns, +1 for the artwork

Penalties: -1 for jokes feeling tired in some places, -1 for repetitiveness