There is a lot going on for Star Wars fans.  Funko recently announced a subscription based box, BB-8 continues to mesmerize me every time I lay eyes on that darn droid, and each bit of news from The Force Awakens makes it harder to wait until December.  Fortunately for us fans, Marvel has stepped up big time and is delivering some amazing content for us to digest as quick as they can get it into print.  It truly is a great time to be a Star Wars fan and I cannot wait for the new film to introduce a new generation to this amazing franchise. 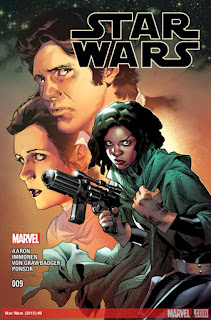 Star Wars #9 - This issue opens up with a bang!  Luke quickly regains his lightsaber from the smuggler who swiped it, only to run into Grakkus the Hutt, a fiendish relative of Jabba who bears a necklace adorned with lightsabers.  Mix in his robotic legs, and you have an odd smash-up of Jabba and General Grievous.   Grakkus is anything but a typical Hutt, and is a welcome addition to the family.  Han and Leia actually get a small improvement to their situation.  When we last left them, Sana, Han's wife (?), called the Empire fleet down to claim Leia's bounty.  I remain in awe of how much fun this series is and can't recommend it enough.

Beauty #2 - We are treated to the second issue in this thrilling story about the STD that people are trying to catch.  For a refresher, the Beauty is a disease that makes the individual who is ill more attractive.  Unfortunately, spontaneous combustion appears to be a side effect.  This is not a good thing and the first issue ended with detective Foster learning he was infected.  This issue picks up with the investigation, but shows how awkward it is for individuals infected with the Beauty.  Foster has a hard time going about his day as everyone is aware of his change in appearance.  This issue introduced the idea of a government cover-up of the side effects of the disease and possible motivations to encourage infection.  Really digging the premise and the introduction that will delight your average conspiracy theorist.

Captain America: White #1 - Jeph Loeb and Tim Sale have reunited to share another classic story of Captain America and Bucky.  The story is from the perspective of Cap while he is adjusting to waking up from his coma.  This is a must purchase for any Captain America fan and it is always refreshing to return to to the 40's and watch Cap and Bucky vs. the Germans.  While I enjoy what is currently happening with Captain America, I always welcome a return to what Captain America does best.  Kicking some Nazi butt!