A book that makes grimdark fantasy feel like a slightly lukewarm but otherwise pleasant bath. 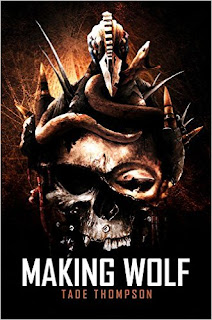 The novel is available on Amazon here.

Sometimes novels take us to the heights of achievement. Heroes overcoming great trials, great evils. There is a sense of jubilation as villains are defeated in the last moment, as battles are won, as good triumphs. As readers there is a shared pride at having reached such an ending. Sometimes, though, novels have no interest in the heights of achievement, in evil as something that can be banished or defeated, in heroes of any sort. In such books, instead of sharing the triumphs of the protagonist, the reader is made complicit in their sins. Making Wolf definitely fits into the later category, creating a rich and haunting narrative that moves with power and destructive energy of a truck tearing a man in half.


This is not a book for the feint of heart. The speculative element comes from the alternate history it creates taking place in Alcacia, a fictional Yoruba nation that in this setting formed during the Nigerian Civil War. What arrives out of this speculative landscape is a world where bribes are king, where violence is omnipresent, and where the food sounds delicious. Seriously, the detail given to the world here is vibrant, revealing a setting torn and stitched back together and torn again. The nation is one defined by the damage done by colonizers, the corruption that is the lasting legacy of the West.

I think that might be the most comprehensive summary I can give to the plot. The novel follows Weston Kogi as he returns to his home country to attend a funeral. From there he is drawn into a plot that places him in the sights of just about every faction in play. Told to solve the murder of a beloved figure in the region, Weston accepts as much to stay alive as because he has nothing else to do. As a character he is drifting, passive, and completely buying into his own lack in agency. He moves through life as an outsider in his former home, constantly reminded through beatings, through the crimes he witnesses and participates in, that the world he left is rotten.

If Alcacia is rotten, though, it is because it has been bruised. Hard. The prose does such a great job of capturing both the humanity and beauty of the place right alongside the extreme and pervasive ugliness. And Weston, for all he wants to be above and separate from the crimes he sees, is right in the middle of them. It's an unsettling read, because as a reader there was a part of me rooting for Weston, wanting to see him survive, win. It's a trap, though, that the novel expertly lays. There is no winning here, no escape. For all that Weston believes it's not really his fault, for all that it's understanding what he does, he does some terrible and unforgivable things during his time in Alcacia, and in the end he does them because he wants to, because he wants to be a person with power, of power. And I, in wanting him to survive, became just as guilty. In rooting for Weston, I was rooting for murder, for rape, for corruption. Because Weston is not strong enough to resist, to fight for something that might benefit more than just himself. He is drawn along, and as much as it doesn't seem like he has any better options, the truth is that he decides to keep going, decides to try and see it through, is bought and sold no less than anyone else that he looks down on as corrupt.

It is an incredibly difficult read. I would call it a grimdark fantasy, because as alt-history it fits into a sort of fantasy, but it has none of the distance that grimdark normally affords from the real world. Here there is no comfort. Which is part of my overall dissatisfaction with grimdark as a genre. It posits the world as dark, gritty, and relentless, but the depictions always toss those things into the past, into some fantasy realm that looks like historical Europe. When George R.R. Martin is asked about all the rape in his stories, he falls back on the "well that's how things were" logic that falls apart in the face of a work like Making Wolf. Because here the crimes are not pushed back into the past. They exist on (basically) our planet, in our time, are witnessed and committed by a man who has been in many ways "Westernized" from living in London most of his life. And though the plot unfolds in Alcacia, his Western-ness does not save him or keep him above what happens. If anything it locks him into being part of the problem, in trying to believe that the things he sees are separate from himself. It is the scars of colonization that exist right now that open up the ugliness of humanity to be viewed, that make colonizers of Alcacia's own sons, including Weston.

And it is the strength of Making Wolf that it refuses to let the reader off the hook. [And here we might get into some mild spoilers, so be warned!] There is no moment of redemption for Weston. There is ugliness and it does not end. In fact, Weston benefits from it. Is seduced by it. And it's hard to blame him. It's impossible to forgive, but it's hard to blame, and that is the ultimate triumph of the book, to leave the reader no easy release, no easy victory. To force that confrontation with the dark. And fuck I think I need a drink after reading this. For every sweeping snapshot of persevering beauty there are five moments of terror and filth and gut-wrenching pain. There are no heroes and, in some ways, no villains either. There are victims. Layers of victims. It would be difficult to say that Weston is not a victim, for example. But his victimization is very different from, say, that of the women in the story, which he becomes complicit in, which he in many ways condones by writing their hurt off as just part of the setting. So the novel is very much engaging the ideas of victimization and grittiness and pain and agency and providing a damning look at how basically being a man and opting to still try to be the hero plays out.

So I have to applaud the book for its unflinching look at humanity. At crime and punishment. It's not really the most pleasant book to read (though the food is lovingly detailed and I want to try it all), nor the most uplifting. Nor is the ending all that satisfying in the traditional sense. But it all works. It works and it's dark and it's a definitely worth picking up and struggling with. And I'm off to get that drink.

Bonuses: +1 for being unflinching, uncomfortable, and uncompromising

Negatives: -1 for leaving me numb to happiness (seriously, I need to go look at kitten videos for a while now)

Nerd Coefficient: 8/10 "quite, quite good!" (check out our rating system here)