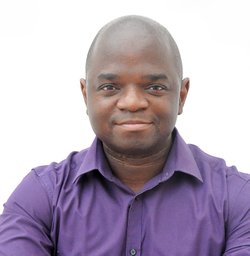 Tade Thompson lives and works in the UK. He writes crime, speculative fiction and general fiction. He is an occasional artist, enjoys jazz, but cannot play the guitar to save his own life. He's on Twitter as @tadethompson and has a website, Long Time After Midnight.

Topically, Nerds of a Feather just ran a review of his latest novel, Making Wolf.

I should point out that I never read one book at a time, so this is a difficult exercise for me. I'm reading The Bone Clocks by David Mitchell. I'm a big fan of Cloud Atlas and while I've read everything else that Mitchell has written, nothing has given me a frisson of excitement like this book. The characters are vivid and read from the first page. I'm only on page 46, but I already feel I know Holly Sykes and the possible transdimensional horrors that might be in store for her. Mitchell is a writer of consummate skill.


I didn't ask if it was cool to pick graphic novels.

I've been a fan of Fiona Staples' art since the Hawksmoor graphic novel she did way back when. Vaughn's work I can take or leave, but I do have all five Ex Machina volumes on my shelf.

Whatever alchemy brought them together on Saga should be bottled. It is an amazing series that grabs you by the gonads from page one of volume one. It tickles the hybrid fantasy/space opera bone. It's surreal and funny and farcical. It has a royal family with TVs for heads. It has a strange interracial couple running away from powerful factions tickling that Capulet and Montague bone. It has a lying cat-not a cat that lies, but one that detects lies in anyone around it. I want a lying cat for Christmas.

I can't wait to see what they get up to in Volume 5.

No Country for Old Men by Cormac McCarthy.

McCarthy needs no introduction, but there's something about this book, something powerful about the voice of the narrator, or the absolute evil of the antagonist, Chigurh, or the utter tragedy of the Moss family. I've always wanted to go back to this book to give it a close, slow read. I want to know how he got me to care about these characters. He also manages to make all the settings seem apocalyptic and bleak. All of McCarthy's books are uncompromising, but this is the one that keeps pulling me back.

Oryx and Crake by Margaret Atwood.

I first read this book ten years ago. I'm a big Atwood fan, but I've never understood her need to distance herself from Science Fiction, even when she's writing science fiction. That may have been the reason I responded negatively to 'Oryx and Crake'. It's the first of a trilogy, and my friend Stephanie Saulter recently read the last book and encouraged me to try again. Maybe it's because I'm older and (one presumes) wiser than I was ten years ago, but I really enjoyed it this time, despite the wonky science and the so-so Sci-fi tropes. The language is exquisite. I have the other two books in the trilogy and I now feel like reading them.

The Masters of Solitude by Marvin Kaye and Parke Godwin.

It's out of print, but you can find second hand versions. I have bought three copies of this book. The first one I read to tatters and I had to buy another. The second one I gave to someone dear. The third one is on its way to decrepitude.

This book was the first non-twee fantasy I read. It isn't Grimdark by any stretch, but it does not look away from the grimy aspects of humanity. It's about leadership, the sacrifices that brings, about the abuse of power (both supernatural and temporal) and intolerance. There is some exploration of telepathy (which interests me as a trope) as well as magic. It's about Wicca versus magic in a far-future, post-apocalyptic world.

It's part of a trilogy that the writers did not finish (one is now dead), but this is the only book that I cannot stop reading.

My book's called Making Wolf. It's a crime noir book set in an imaginary country in an alternate history West Africa. It's a gritty narrative in which I mash up Chandler and Spillane against West African culture. I think it's awesome because I have a bad guy called Church who will get completely under your skin. Don't take my word for it. Read the book and see. Money back guarantee if your skin doesn't crawl.
Posted by Charles Payseur at 1:00:00 AM