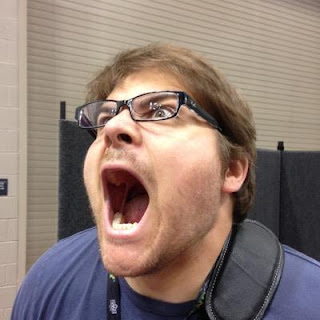 Sam Sykes is author of the Tome of the Undergates

(which we quite enjoyed), and is also known for his incisive commentary on fantasy and fandom. Today Sam shares his "6 Books" with us...

1. What book are you currently reading?
I have just now finished A Head Full of Ghosts

. Mallory O'Meara, a film producer, and myself have a two-person horror club and she hugely recommended this to me. It may seem like a cop-out to answer this question with a book I am no longer reading, but A Head Full of Ghosts was such a complex and twisty narrative that I'm going to be thinking about it for a very long time.

You know, I don't really pay attention to what's hot and off the presses. I'm gearing up to read Sebastian de Castell's Traitor's Blade

, because someone said it reads a lot like The Lies of Locke Lamora

. But that came out awhile ago, didn't it? Oh! I have a standing threat against Tor to give me Brian Staveley's third book, The Last Mortal Bond, as soon as it's in ARC form or I will stand outside their offices in the rain with a boombox over my head playing Spandau Ballet's Gold. I guess if I'm ready to do that, I would be really excited about it.

I really don't re-read a lot of books. Partially because I feel a lot of good authors get passed up in favor of re-reads. Not that I blame anyone for re-reading their favorites, but it rarely has the same magic twice for me.

Oh, Justin Landon and I just did a whole podcast about how I changed my mind about Joe Abercrombie

. Not his actual stories--those are still great--but for a long time, I thought Joe's sex scenes were the worst things I had ever read, fraught with words like "squelch" and "the root of his cock."

But with time, and more Abercrombie stories, I have come to realize that they are actually brilliant. Abercrombie's stories are all about what it means to be human and how hard it is to be that human. Sex is always the ultimate test in his stories--the moment where there's no more pretense, no more airs to put on, no more goals to aspire to--and his characters always fail that test. It's beautiful and tragic and squelchy.

Man, we were just having a chat about this on twitter in regards to Dragonlance. But one thing I'd say definitely influenced me was Drizzt Do'Urden

novels by R.A. Salvatore, though not in the way you might expect.

Drizzt novels are always fraught with fight scenes. People fight at the drop of a hat and 14-year-old me loved that. But as I grew up with these novels, I started noticing that they were all very clean: a lot of parries, a lot of dodging, a lot of footwork (Salvatore used to be a boxer, I've heard, so I appreciate that detail), and by the end of it, you couldn't read the word "feint" without throwing up. I felt that robbed a lot of the combat of its emotional intensity.

So in my books, fighting is very much impactful. I like describing blades sliding through flesh and the spatter of fluid on the earth, I like writing about that popping sound you hear in your head when something inside you comes loose, I like bone-jarring, ugly, dirty fighting. It makes me feel happy.

6. Finally, what's your latest book, and why is it awesome?

My latest book is The City Stained Red

. It's pretty great for the reasons I've listed above. It's visceral. It's joyful. It's exciting. It's a story of demons walking the earth, thieves' guilds carving each other up in the street, religious armies battling, wizards scheming and the six people caught in the middle of it.

I've alternately heard of it described as a D&D party meets a shonen manga and a soap opera with monsters. I like both of those.