Microreview [book]: The Man in the High Castle by Philip K. Dick 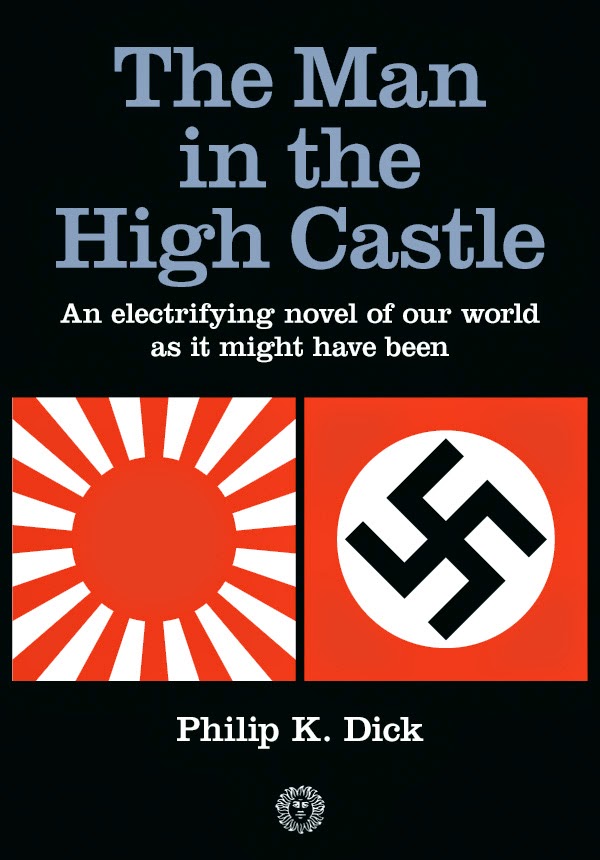 What would have happened had the Axis won World War II? An intriguing question, and one that Philip K. Dick took on in this fascinating alternate reality, The Man in the High Castle, which he wrote in 1962. So intriguing is this question that it has recently been adapted into (and summarily guillotined by) a new Amazon television show, one that highlights the struggle between the good ol' American forces of freedom and goodness and the totalitarian Nazi Third Reich dystopia. Of course, the television show is zillions of light-years removed from what Dick had intended for his novel. Whatever the case, the TV adaptation piqued my interest in this classic Hugo-Award-winning novel.

So what would the world have looked like? The Man in the High Castle, which takes place in the early 1960s, is witness to a new political order far removed from our own. The Third Reich has seized most of Europe and Africa. The Jews have for all practical purposes been wiped out in Nazi-controlled areas, and there are whispers of brutality and racially motivated genocide that have decimated much of the African continent. It took only fifteen years for the Germans to ruin half a continent. The Germans, thus, have forged a new order only beneficial to blond-haired, blue-eyed fascists or to people of Aryan stock. Their Japanese allies, on the other hand, managed to construct the Greater East Asia Co-Prosperity Sphere, which encompasses the arctic tundras of Sibera to the jungles of Burma and India, and even reaches as far as Australia, New Zealand, and the west coast of America.

The story takes place, for the most part, in the former state of California, which is ruled by the Empire of Japan. The United States of America has been divided into three separate entities: the German-controlled United States of America; the buffer zone of the Rocky Mountain states; and the Japanese-controlled Pacific States of America. Whereas the Atlantic seaboard is controlled with the firm hand of the Third Reich, the Japanese rule the Pacific states with a much lighter (and technologically poorer) touch. Jews theoretically have less to fear from their Japanese overlords than they would from the Reich.

The main storylines follow four main characters. Each of these characters face difficult moral dilemmas at some point during the book, and each of them work to reset their moral compasses. Nobusuke Tagomi, a Japanese businessman who works in the Nippon Times Building in San Francisco, is forced multiple times to choose between his own conception of right and wrong. Robert Childan is an "authentic" American artifacts dealer who is torn between being obsequious toward the power of his Japanese overlords and  seizing his own (national, cultural, and personal) worth through his wares. Frank Frink, a craftsman who produces cheap imitations of "authentic" Americana, sets out to reclaim his own sense of worth through the creation of contemporary art. Finally, Juliana Frink, Frank's estranged wife, begins a quest (with an Italian truck driver named Joe) to find the author of an underground novel, and in the process will make a moral decision that will no doubt affect her for the rest of her life.

The notion of authenticity dominates each overall storyline. What does authenticity mean? And its corollary, how do we know what is fake? The novel is populated with figures and items that are not what they appear to be. Frank Frink is living under an assumed name, and he produces imitations of "authentic" civil war memorabilia. Childan sells much of this "authentic" Americana to a rich Japanese clientele. And his Frank's estranged wife, Juliana, becomes fascinated with a novel called The Grasshopper Lies Heavy, which poses a "fake" reality where the Axis loses the war. I don't want to spoil this for future readers, but a number of other characters are also not who they pretend to be. In the process, Dick does a fantastic job of problematizing our own notions of reality in history and society. The true brilliance of this novel is the way in which Dick leaves the reader guessing about what is true and authentic.

Too bad, then, that this brilliance is marred by utter Orientalist and culturalist essentializing hogwash.  I remember reading that Dick never finished the sequel to The Man in the High Castle because he had trouble getting into the minds of the Nazi victors. If that is the case, he shouldn't have written this novel either. He did not understand the Japanese any better. The Man in the High Castle is replete with Orientalist notions of America's new Japanese overlords. They are inscrutable, difficult to tell apart, overly rigid, focus solely on propriety and at all times require the proper utterances, and have attained a sense of simplicity based on wabi, which of course cannot be understood by outsiders. And for some reason, the Japanese constantly refer to the I Ching as an oracle to give counsel at important moments in daily life. But isn't the I Ching a classic Chinese text? And isn't using the I Ching as an oracle absurd? At least Tagomi at times recognizes this absurdity:


"We are absurd," Mr. Tagomi said, "because we live by a five-thousand-year-old book. We set it questions as if it were alive. It is alive. As is the Christian Bible; many books are actually alive. Not in metaphoric fashion. Spirit animates it. Do you see?"

Making matters worse, Japanese culture is often brought into focus through the use of another Chinese concept, the Tao. Tagomi often worries that he is straying far from the Tao. And Childan acts obsequiously toward a young Japanese couple that are "close to the Tao." Where, then, does Chinese culture end and Japanese culture begin? Are they one and the same? [The answer is a definitive "no"]. Even a basic reading of prewar and wartime newspapers would have disabused Dick of many of these notions, and might have convinced him against focusing on Chinese concepts to explain Japanese culture, especially at a point in time when a nationalist and inward-looking Japan regarded with contempt their Chinese brethren.

The Man in the High Castle is thus a reflection of its times. Philip K. Dick perhaps was influenced by a general mixing and mashing up of all "Oriental" cultures that was prevalent in the 1950s and 1960s. The problem with this, however is that it undermines the the cultural "authenticity" of the world he created. Was this done on purpose? Did Dick's ambiguous take on what is "authentic" extend to his world building as well? Perhaps such an argument could be made, but I would have a hard time buying it owing to the profusion of Orientalist notions throughout this novel. In the end, Dick's brilliant message about historicity and authenticity gets lost in a setting of cuturalist essentialism. And this is too bad, because The Man in the High Castle is a real thought-provoking novel...

Bonuses: +2 for the brilliant ambiguity of authenticity

Penalties: -4 for the utter Orientalist hogwash

Nerd Coefficient: 6/10 "Still enjoyable, but the flaws are hard to ignore"