Huge week of comics and sadly I wasn't able to read as many titles as I would have liked.  I will likely check out Squirrel Girl, the return of Hawkeye and The Nameless this weekend.  Despite that, I picked up a great stack of comics at my LCS and am riding the wave of excitement of these books and the new Daredevil teaser right into the weekend!  If you don't have Netflix, make sure you sign up as Daredevil drops in April and Wet Hot American Summer isn't far behind. 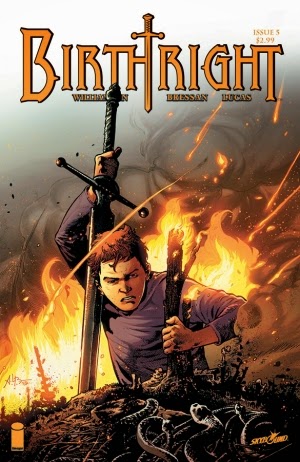 Pick of the Week:
Birthright #5 - If you are not reading Birthright then I would highly encourage you to stop what you are doing and either go to your LCS or purchase it on ComiXology because you won't be disappointed.  The story centers around Mikey, a young boy who disappeared in the woods as a child.  Everyone suspects that his father murdered him, but are shocked to see him return as a grown man.  We learn that he was kidnapped to another dimension to stop the evil Lore.  Joshua Williamson does a wonderful job switching between Mikey's journey as a child to his current quest as an adult.  The juxtaposition of the young and innocent Mikey with his grizzled adult counterpart really help paint a complex picture of what he is dealing with.  There were two key moments in this issue that make it difficult to wait for the next issue.  I am officially hooked.

The Rest:
Star Wars #2 - As of this moment I am thrilled that Star Wars is in the hands of Marvel.  This series is off to an exciting story that takes place between Episode IV and Episode V.  I do fear that this will raise the bar for what is expected of J.J. Abrams this summer, but I am going to enjoy reading every page.  This issue featured Han Solo driving and AT-AT and Vader attempting to take it down with only the Force.  Vader has been a total bad ass thus far and it has been nice to see a rebel operation not go according to plan.  Still not sure how they are going to get out of things, but completely loving this series.  Add in that Mark Waid is going to be penning a solo Princess Leia title and I am all in on Marvel owning the license.

Nailbiter #10 - Joshua Williamson has an impressive track record of horror titles and Nailbiter is no exception.  This issue almost felt like a one-shot, but Williamson had two tricks up his sleeve that really made this issue sing.  The one-shot was entertaining and had a mini-twist of its own, but what it contributed to the overarching story has me salivating.   This issue would work as a great jumping on point if you don't want to pick up the back issues (you should though).

Saga #25 - Just when I think that Brian K. Vaughan can't possibly push the envelope more than he has with this series, a dragon marks a group for slaughter with her urine.  I feel not a lot happened in this particular issue, but much has to be resolved in the current state of affairs.  A rare week in which the new Saga is not the pick of the week, but one of my favorite series nonetheless.

Feathers #2 - This is what an all-ages comic should be.  It is approachable to young readers, and complex and entertaining for older readers.  In the second issue of a six-part mini-series (I would love to see it picked up as ongoing), Poe and Bianca's friendship grow as he explains how things work in the maze.  Bianca is much smarter then she appears, and quickly figures out Poe's current role.  This series has been packed with humor, action, and is just plain fun.  I would recommend this title for readers of all-ages, but especially those hoping to introduce young readers into the wonders of comic books.