All I need to say is giant squid submersible, right? 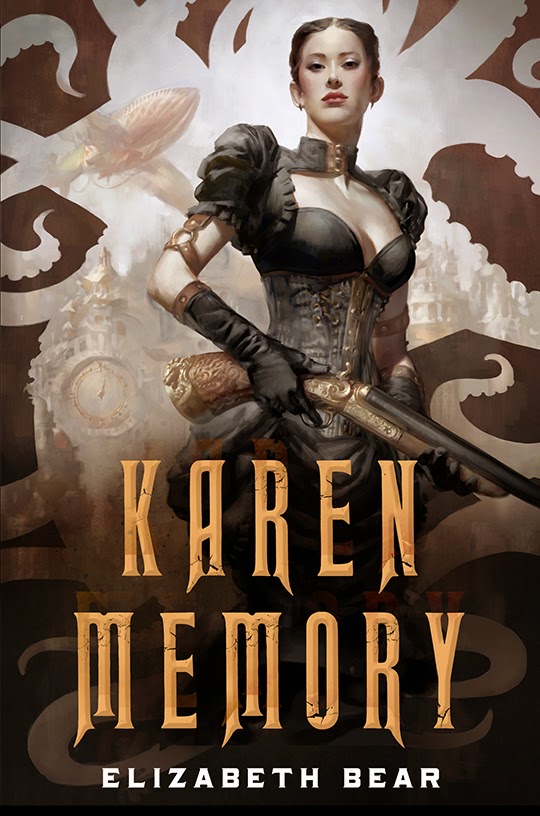 Blending a historical Western with a healthy dose of steampunk and a heaping helping of kick-ass, Karen Memory is probably the most unbridled fun I've had with a book in quite some time. And it's one that, with its very existence, seems to challenge the conventions of how history and realism fit into a speculative framework.

Because, for all that the book includes a lot of Wild, Wild West-style steam technology and alt-historical trappings, Karen Memory is still, at its heart, steeped in historical authenticity. What's surprising about that, what's refreshing, is that the book doesn't linger on the ugliness or the poverty of some mythical "past," but paints its setting much as we see the present, as a mix of positives and negatives. Too often (I feel), the "past" is used in speculative fiction to evoke a dirtiness and sense of hopelessness as a way of framing narratives that are violent, pessimistic, and narrow-minded. Either the past is used as a way to Other certain struggles (wasn't it bad when people were killed based on their race, gender, and sexuality, as if it's no longer happening) or as a way to justify stories that are violent and pessimistic under the guise of "historical accuracy."

Karen Memory, however, has the feeling of a book that was carefully researched, and even some of the characters in the novel are based off of historical personalities. The struggles that Karen and her friends engage in are not just revolutionary by the standards of the time period, but are still revolutionary today. The sex positivity, the importance of consent, the freedom to love openly who you love without fear of imprisonment or violence: these issues are not things we can safely laugh about because "look how backwards the past was." These are issues that were issues then and are still issues now. This book does not exactly clap the present on the back and say "look how far we've come." Instead, it points back and says "look how long we've been fighting." It affirms by refusing to erase those historical figures that challenge the widely accepted idea of what the past was like.

But perhaps I should look a bit at the actual story of the book. Karen Memory the character is a sex worker at the Hôtel Mon Cherie in Rapid City, which is owned by the impressive Madame Damnable. Most of the principle characters of the story are female, are either fellow sex workers or those working to free women from the shackles of sexual slavery. I loved that the book draws the line between consensual sex work and non-consensual slavery. Never does it blame women for being in sex work, either by choice or by force. For those who choose to work the trade, it's a legitimate choice that allows them empowerment and opportunities they would otherwise not enjoy. For those forced into the trade it's rape. Never is the violence or unwanted attention directed at the women in the story used to pass moral judgement on them. Again, this works in the historical context as well, because sex work has pretty much always been a profession, and though today it is outlawed in most of America, the taboos of today do not stretch infinitely back. Again, the story has a ring of historical authenticity while rejecting the standard "historical" portrayal of female sex workers.

And here I pull myself back yet again from tangent-land. The action of the book is classic, playing off of tropes in Western stories by having the house be threatened by a greedy and tyrannical asshole who also happens to have a mind control machine. And perhaps some ties to some Russians who have a GIANT SQUID SUBMERSIBLE! It's a submarine that looks and can function as a squid, using its tentacles to rip other ships apart. Karen is helped not only by her friends at the Hôtel Mon Cherie but also Marshal Bass Reeves, a black man on the trail of a killer escaped from Indian Territory. With him is his Comanche posse man Tomoatooah, and together they assist when the killer they've been following shows up in Rapid City, leaving a body right at the door of the Hôtel Mon Cherie.

What follows is a fast paced crash of action, betrayal, and our heroes generally kicking ass. Seriously, aside from the squidmersible (which should really be enough to sell anyone on this story), there are knife fights, gun fights, electricity fights, and even fights involving a modified sewing machine that works as a mech-suit. This book is just incredibly entertaining. It's fun and voice established with Karen is relatable and genuine. She is a woman making the best of her situation, which turns out to mean generally being amazing. She's stubborn and determined and capable, flawed and yet unwilling to give up. And amidst all that she's starting to fall for a woman who managed to escape sexual slavery and who has a knack for languages. There is just so much good to say about this book.

Not that quite everything worked for me. Unfortunately, I felt that the villains in the book weren't exactly the most nuanced. Recognizable, yes. There are plenty of men who want power and domination and hate women. And it makes for some fist-pumping fun to see Karen and company overcome seemingly insurmountable odds. And it fits with the style, with the Western aesthetic which is carefully created and maintained through Karen's voice. Westerns aren't exactly known for their subtle villainy, but with all the tropes that the book breaks, I would have liked to see a little bit more in that direction.

Still, overall the book is just incredibly fun. It's challenging and groundbreaking less in the actual storyline, which is fairly standard action-adventure Western and more in the way it builds its setting, the way it refuses to let the grit associated with the past to settle into every aspect of the world. The book is groundbreaking by being more realistic than "realistic" Western stories that focus solely on the death, rape, and white men saving the day. Because for all this book has some very dramatic confrontations (like a sewing machine mech-suit vs the squidmersible), it still values life. Death is not something that is visited wholesale on city and town. Each death is impacting and important. There is a loss with every death, a value that the book chooses to dwell on, because though death might have been more present in the past (in the West especially, as anyone who played Oregon Trail would know), that doesn't mean that it was any less tragic, or any less significant.

In closing, the book does an excellent job of providing a fun, kick-ass story that left me smiling. The plot might be a bit straightforward, but it's enjoyable and full of action and tension. The real draw of the book, for me, is its approach to history and to the tropes of the Western. In breaking the expectations of what this time and place in American History looked like (and yes, even with the steampunk trappings of airships and mech-suits), Karen Memory manages to show what a historically authentic book can be, and is full of diversity, empowerment, and affirmation.

Bonuses: +1 for a great take on historical authenticity, +1 for SQUIDMERSIBLE!

Negatives: -1 for not the most complex of villains