This has been an odd week.  Neptune buried my neck of the woods with a blanket of snow, dropped temperatures well below freezing, and delayed my ability to pick up my weekly fill of comics.  By the time the shipment was in I was surprised in the number of titles that caught my eye.   It seems all IDW books are delayed due to the port strike, and I am left with only two books to review.  With only a pair to select from, I am going to forgo the normal Pick of the Week and simply review the titles. 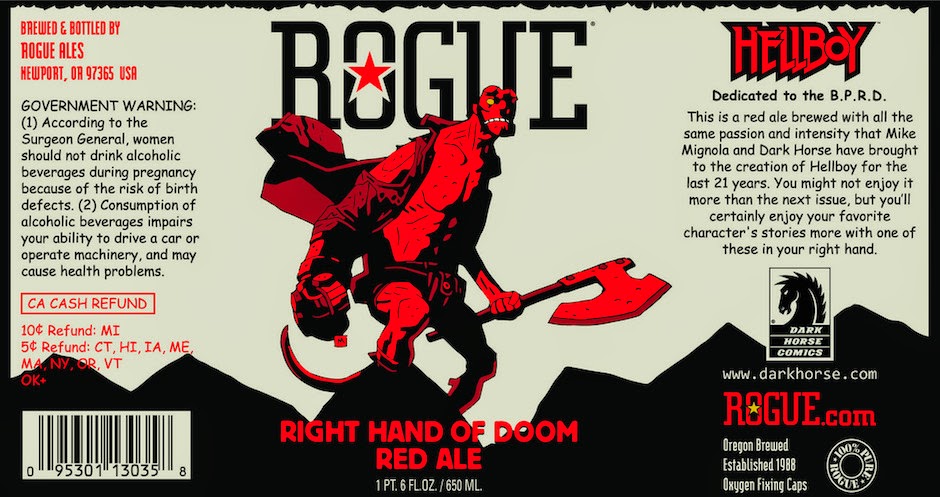 Before hopping into that (pun intended), did you know Dark Horse collaborated with Rogue Ales and made a Hellboy beer?  Right Hand of Doom Red Ale drops on February 21 and you can preorder the beer at www.rogue.com.  It is described as a heavy-handed, supernatural red ale and the good folks at Things from Another World in Portland are hosting a release party on the 20th.  I don't think my wife would be too keen on me flying out for this, but we shall see.

She-Hulk #12 - The brilliant run by Charles Soule, Javier Pulido, Muntsa Vicente, and VC's Clayton Cowles came to an appropriate end this week as She-Hulk closed the books on infamous blue file.  Soule assures us that there will be more She-Hulk in the future, but it will unlikely be from this creative team.  Soule closed the case on a run that featured a super-hero that didn't act like your typical super-hero.  She relied on her wit, charm, compassion, and skills in the courtroom to bring about positive change.  Sure, some bad guys got punched and there were some epic fights, but this title marks the end for a unique book in the Marvel Universe.  This is one I hope gets the deluxe treatment as a collected series.

All-New Captain America #4 - This issue really had it all.  A rocket of fleas filled with weaponized blood, and appearances by Zemo, the Armadillo, and Cobra.  Despite Sam Wilson wielding the shield, which I am a fan of, Rick Remender has really captured that classic Captain America feel.  The characters feel human and the schemes that are being hatched seem plausible.  Even a horde of weaponized fleas.  Following Ed Brubaker's departure I found myself no longer reading Cap.  Thanks to the remarkable job Remender has done with the new Cap, I am happy to be back on board.