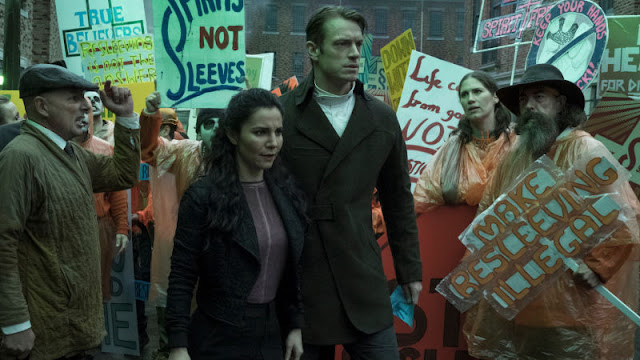 Now we're getting into the meat of the story. Kovacs is still trying to solve the murder of Laurens Bancroft, but now he's also trying to solve the sleeve-murder of Lizzie Elliot--part of a deal Kovacs strikes with her father, Vernon, so that Vernon agrees to be his sidekick. Unfortunately, some gangsters set Kovacs up, thinking he's some dude named Ryker. Who the hell is Ryker, you ask? We progressively get answers to that, and a whole lot more, across these three episodes.

You'll recall I was pretty lukewarm on episodes 1-3, but enjoyed it enough to continue. Episodes 4-6 are different--I don't feel lukewarm about any of these ones, though the cumulative reaction is still "like not love." Allow me to explain...

Episode 4 centers on the Lizzie/Ryker mysteries. A gangster named Dimi the Twin abducts Kovacs as he seeks answers about Lizzie. Dimi the Twin is actually a double sleeved individual, which is highly illegal. The other Dimi, you may recall, was turned into meaty pulp by Poe's retractable machine guns. This Dimi wants to know why Ryker killed him, and wants revenge. So he brings him to a private lab offering virtual reality torture chambers for a price. What ensues is 45 minutes of torture porn that manages to be both gratuitous and tedious. To put it another way, this is cheap shock n' schlock with a ho-hum payoff. I almost quit the show in disgust.

...thankfully I did not, as Episode 5 is everything Episode 4 is not. It is exciting, well-paced and very human. Though it centers on a plot reveal you will have seen coming more or less since the pilot, it is executed well. There is also a shocking event that unnerved me, but in a really good way, as it made me realize that finally I care what happens to these characters. They are now people rather than moving action figures.

Episode 6 isn't quite as good as Episode 5, but it is still quite good. And there is a really cool, though somewhat nonsensical, scene at the end.

I'm still on board, and like the uptick in quality we've seen over the past two episodes. At the same time, I have some concerns going forward. First, I'm wary of more shock and schlock. I'm fine with violence but it has to move the plot forward, and should be proportional to what's that movement calls for. Cheap shock n' schlock is a waste of good science fiction, in my opinion. Second, we've now had quite a few plot twists, some of which make more sense than others. The key to a good mystery is to leave just enough red herrings, but still make sure everything feels intuitive to the reader/viewer. We're starting to get into "huh?" territory now. We'll have to see where things go from here.