Netflix's new science fiction show, Altered Carbon, is based on a novel of the same name by Richard K. Morgan. It's basically a mashup of neo-cyberpunk, detective noir, milSF and techno thriller. Since I have particular interests in the first two parts of that equation, Altered Carbon looked to be right up my alley. So I decided to commit to 3 episodes, after which point I'd take stock. Three episodes in and I like it enough to continue. It's not quite as good as I'd hoped, however.

Takeshi Kovacs is, or rather was, a kind of super soldier known as an envoy. Envoys were part of an insurrection against the hegemonic polity, the Protectorate. The insurrection failed and the envoys were "put in ice." However, in the future your mind, memories and soul are stored on a "stack"--a kind of hard drive that is surgically inserted into your body. As long as the stack isn't damaged, it can be taken out of a dead body and inserted into a new "sleeve" (i.e. a body). Religious types refuse to be re-sleeved, believing that it prevents the soul from ascending to heaven. Pretty much everyone else who can afford to do it, does.

So Kovacs is re-sleeved into the massive, jacked body of Swedish actor Joel Kinneman. This is done at the behest of ultra-rich "meth" (i.e. meta-human) Laurens Bancroft, who wants Kovacs to investigate the "murder" of his previous sleeve. Unlike the plebs, Bancroft doesn't need a stack to resleeve, nor does he even need a sleeve. His mind, memories and soul are uploaded every 48 hours to a satellite, which can then beam it back into a cloned body. But he was "murdered" just before the periodic upload, which means Bancroft has no memory of the event or the events leading up to it. Oh the humanity. In any event, most people think Bancroft committed suicide; Bancroft is convinced he was murdered. His femme fatale wife, Miriam Bancroft, takes an immediate interest in Kovacs, as does Bay City detective Kristin Ortega. A mystery ensues.

First, the things I like. It's a very pretty show--especially the sweeping vistas like the one above, but also some of the interiors, like Bancroft's mansion in the clouds and The Raven, which is the hotel where Kovacs lives. I also really like some of the supporting characters, like Poe (the AI who runs The Raven) and Ortega. And the show is commendably diverse. Kovacs is supposed to be half Japanese and half Hungarian (judging by the name), and his partner is black. Ortega is Mexican; her partner Aboud is an Arab Muslims; their captain is Japanese. I like to see futures where everyone is mixed up and the social categories of today don't have quite the same meaning several hundred years into the future.

I also liked how the immortal lives of the wealthy, in secluded compounds at cloud level, serves as a literalized metaphor for the inequality that increasingly defines most societies. In fiction, I often grow weary of literalized metaphors, but they work on TV. And of course, the existence of stacks and sleeves brings up interesting questions of how we'd act if death were not a guarantee. And finally, the show features good acting, pace and atmosphere. 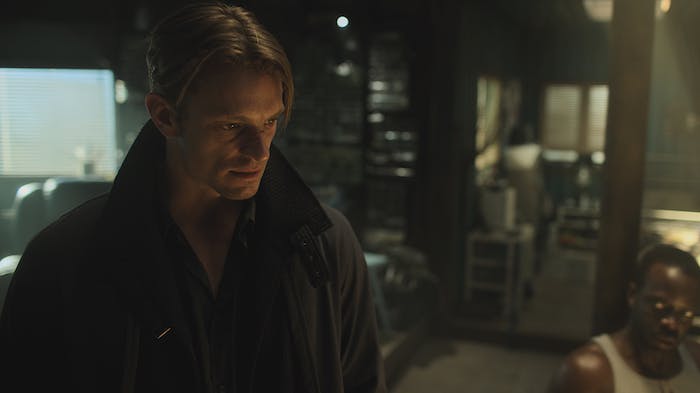 But there are a few things that keep me from really loving the show. Kinneman grows on you as the series progresses, but there are moments where he comes off like a cross between Dolph Lundgren and Kevin Sorbo. The super soldier also doesn't quite fit the noir mold. Not that anyone is required to stick the old formula, but the genius of Philip Marlowe is that he can take a punch as well as dish one out, and that he's always outgunned and so has to use his wits to stay alive. Kovacs, on the other hand, can destroy anyone and everyone. Others might like this setup, but for I prefer the Marlowe style of detective.

Then there's the violence and nudity. Actually I don't really mind the nudity--it's just the human body,  after all. And I can handle the show's level of gore and splatter too. It's the intersection of the two that bothers me. So much "prestige TV" centers violence against women--Game of Thrones, Westworld and so forth and so on. Altered Carbon does as well. There's an awful lot of naked women being hurt by men. Yes, it happens in the real world and yes, there is violence against men too. But the brutalized are almost exclusively all women, at least 3 episodes in.

I'd stop short of calling the show misogynistic. There are plenty of well crafted, three dimensional female characters; and I *think* the show is trying to say that violence against women is bad. At some point, though, enough is enough. And there's a cumulative effect of all these shows using violence against women to illustrate just how dark and depraved these fictional worlds are. It would be nice if, for a change, it weren't centered.

While not perfect, I did like Altered Carbon enough to continue watching. So that's something.