Marvel teased its new event and....ahhh who am I kidding? The Image Expo was held yesterday and over 20 new creator owned series were announced! The series that stood out to me included Dead Rabbit from Gerry Duggan and John McCrea and Leviathan by John Layman, Nick Pitarra and Mike Garland. Dead Rabbit is about a mercenary who is forced out of retirement and Leviathan is described as Godzilla by way of black magic. Yes please! 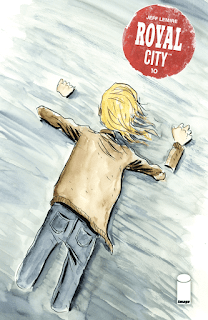 Pick of the Week:
Royal City #10 - This series has grown even more emotional as we get a peek into the final days that Tommy was alive. The Pike family, who seemed so normal and put together at the start of this series, has a lot of skeletons in the closet and things aren't as peachy as they seem. What started as a family coming together to rally behind their sick father, has turned highly introspective as they all reflect on the memories of the troubling loss of Tommy. In the latest issue Tommy mixes alcohol and prescription medication after being dragged to a party at the old factory he didn't want to attend. What resonates with me in this series is how Jeff Lemire paints his characters as feeling alone despite how social they all appear. I sound like a broken record when I review Lemire books, but he really has an uncanny ability to write people in an extremely realistic way and in a way that the reader connects with his characters on a personal level with relative ease.

The Rest:
Dept H. #23 - We now know the true identity and motive behind the murder of Mia's father and the sabotage of Dept. H. Matt and Sharlene Kindt's stunning mystery at the bottom of the sea will reach its conclusion in issue #24, but what was revealed this week truly put all of the pieces together. Mia is still racing to the surface with the cure, but it is unknown if she will make it or what she will find when she finally emerges from the sea. This series has been a delight from the beginning and I sure hope that Matt and Sharlene will continue to work on future projects together.  I can't wait to read the conclusion!

Birthright #30 - This issue is a culmination of a multitude of factors that are starting to set things right and restore some sense of normalcy. I will admit to being a bit confused during some of the interaction within Mikey's memory, but alas!  The Nevermind has officially been separated from Mikey and it seems to mark the beginning of the end.  This is an odd crossroads for a series that I have enjoyed. It is one I want to read from the beginning again so I can see how Joshua Williamson brought everything together. While I want to see this series continue and want to learn more about this world Williamson has created, I don't want this comic to drag on and want it to reach its appropriate conclusion. I honestly thought that this might be the end, but appreciate how Williamson set up the next arc. It is one I am looking forward to and will trust him in terms of the direction this series takes.  It has been a great ride thus far.

Hit Girl #1 - Mark Millar, fresh of rebooting Kick-Ass, gives us an uber-violent debut of a new Hit Girl series. This definitely took a direction I wasn't expecting, both from a story and art perspective. Ricardo Lopez Ortiz gives this series an anime inspired style that works really well with the over the top action sequences. The story centers around a lonely Hit Girl and her desire to find a new partner. Her desire is so great that she is willing to partner with a convicted hit man who has killed over one hundred people over a twelve year period. She figures that he would rather be free after helping her out than serve 10 consecutive life sentences. Definitely more violent than the first Kick-Ass, but I think I preferred the new character introduced in that series. Either way I am looking forward to both of these series.

Daredevil #599 - Charles Soule is setting up the 600th issue of Daredevil to be a doozy!  I am a big fan of Muse and how Soule has used him to sow discord and make him one of the most feared villains I have read.  The dynamic between Mayor Fisk and Matt Murdock is very interesting, but it seems that Fisk is always one step ahead. Murdock is beginning to work on a way to oust Fisk, but it is coming at the cost of being blind (sorry) to what Muse is doing. This arc has been very tense (as was the other one with Muse) and I am fearful of what issue #600 is going to bring.

Infinity Countdown Prime #1 - We are officially on the path to the next Marvel event and another reset of the Marvel Universe. Gerry Duggan is at the helm of this series and it was an interesting, albeit predictable, walk through the struggle to control all of the gems. Depending on the direction it takes it might be fun to see how the competing interests compete over the gyms. I must have missed when Wolverine learned how to teleport and that was something to see during the opening sequence when he took down some of Ultron's minions who wanted the stone in his possession. Most big events are a lot of hype that under-deliver.  I don't have high expectations for this one, but found this first issue enjoyable.

Doctor Aphra #17 - Aphra and the crew she is temporarily working with infiltrated the Hivebase-1 and for a brief moment it looks like they might be joining the Rebellion.  That is until they run into none other than Hera. This was a welcome surprise and led to an exciting jailbreak led by Tolvan still driven by ulterior motives. The most recent arc has been a bit confusing as it lacks a clear driving force, but the romantic tension between Aphra and Tolvan has been an interesting twist. As this was one of my favorite spin-offs I have high hopes that this series will return to its roots as this arc develops.