Even though my pull list only contained four comics this week, the comic book world that is 2017 appears to be off to a good start.  Some titles from my favorite creators returned this week, and the last panel in this week's Daredevil has be shaking in anticipation of the next arc. 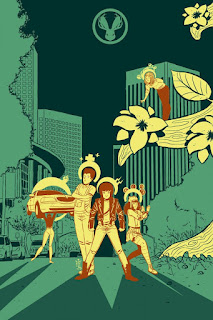 Pick of the Week:
Grave Lilies #1 - Somehow this book from Z2 Comics flew right under my radar.  It wasn't until I saw a tweet from Cullen Bunn that I realized he has a new story out with some stunning art from George Kambadais.  Grave Lilies is a story about five mysterious young women who appear to be the result of genetic experimentation.  The story opens with an explosion that frees them from the facility where they were being captive.  The young women have no idea if their memories are real and quickly learn that each one has some sort of supernatural ability.   The 80's anime style art paired with Bunn's storytelling is a combination that really makes me happy and has me salivating to see what we will uncover in the second issue.

Daredevil #15 - The new arc of Daredevil opened with a bang this week.  Wanting to take out his frustration on what happened to his former partner Blindspot (his eyes were gauged out by Muse), Daredevil puts a bounty on himself creating a constant flow of d-list baddies to beat up.  This fun break between storylines has an unexpected ending that is disturbing on multiple levels.  On one hand a father takes his turn at claiming the bounty despite his personal reservations about hurting a good guy, on the other hand you will have to witness the glory that is the last panel as I will not be spoiling it.  So good.  So very, very good.

Southern Bastards #16 - Your favorite comic book about high school football in the south is back and Coach Boss is none too pleased about his current two game slide.  Looks like Coach Boss has started a war with the rival town of Locust Fork.  In an attempt to secure victory for his Running Rebs, Coach Boss and his cronies beat up a star receiver from the opposing team and his parents.  Somehow Theron Goode is able to play through the pain of a leg fracture in an attempt to spoil the Rebs' attempt at breaking their losing streak.  In a viciously violent issue in this series (which is saying something), it looks like all hell has broken loose.

Birthright #21 - It has been awhile, but Joshua Williamson gifted us another stellar issue of Birthdright.  For the first time in this series, we are given a real glimpse into the life that Mikey led on Terranos when he was first transported to the other world.  Told from the perspective of Rya, it is an important look at his journey from an innocent child to the chosen one.  I am going to have to refresh myself on a few key points as it has been some time since the last issue and what Williamson revealed in this issue has rekindled my interest in how we got to this point in the story.