Retrospective: David Bowie and the triumph of the alternative 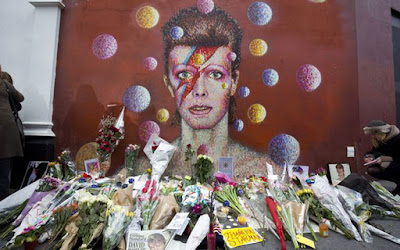 Either too much or too little has been written about the musician, actor and visionary who died just over ten days ago. Depending on your opinion of course, the end to David Bowie's life has brought a range of reactions from 'oh no' to 'oh well', and nowhere has the 'oh no' reaction been louder than in the competing, untrustworthy bleatings of writers out in the press and online. This flood of response has been, in the UK, at least, possibly too much, resulting in my mind at least an odd diminishing of Bowie himself in the spotlight which feels so focused on the commentators themselves and how they feel. Granted, an unexpected event that touches so many takes a while to process, and there can be no denying the enormous popularity and influence of his work, and that should be fully acknowledged. Yet as these words being written now dare to join the carnival of grief, nostalgia and remembrance, my first thought isn't 'Everyone! I have something important to add!' but 'Should I even bother?'. We have all read and heard the hundreds of tributes - some beautiful, some educational... and some bandwagoning (fuck you, David Cameron). It would be a bit like spitting in the rain to just say 'We loved him too; can we join in the sadness festival?'. I also want to distance the man's work and his varied message from the celebrity, the Fame, the clamour of the gutter press. Yet, whilst not wishing to add to the chorus unnecessarily, we at Nerds of A Feather, Flock Together do want to show our huge appreciation for his work and mourn his passing. And, despite my cynical phrasing above, I as sole Brit on this blog am very proud and not a little nervous to take on the task. Please, please comment below critically because I don't think I've succeeded and your nuggets of Bowie connection will say far more than any generalised view can. But here I go nonetheless ...

As I was growing up, his smile, suit and dancing (and hair) make me think he was hosting a party I was too young to go to, and his music was too minor key to quite delight. Let's Dance and its other-worldly video was released while I lived off the road in Bromley where he spent most of his youth (the "jumping off point" of suburbia) and so I was particularly interested in him. Yet for every moment of instinctive joy in the "and if you say run" of that song there was the alienating wail of "put on your red shoes" and my brother and I felt our immature ears squirm. So, born in '76, I was slow to appreciate him, but once I did I realised his lyrics, his melodies, his rebellion and most of all his constant refusal to pander to the mainstream, the banal, had already become a part of me and how I saw the world. That process of falling in love with something (as opposed to someone) can be more gradual, and that often makes it more powerful. So, to share awkwardly my own 11th of January moment, I was driving to work with "Black Star" having been stuck in my head for three days straight, and so I put on the radio to change my ear-worm, at 7:08, the exact moment that BBC 6Music announced his death. The rest of my drive was dominated by shock and gentle tears as, turning from station to station (pun intended), his music seemed to float up from the speakers to the sky ( I also listened to traffic news and stopped for a coffee and Twix; let's not get too melodramatic, now).

One joyful aspect from the loss of someone who produced such a huge body of work is the opportunity and inspiration to revisit that work, or discover new sides to it. I had never got around to listening to the Heroes album properly, for instance, and hadn't given his early 90s albums much of a chance. My days since have been almost entirely full of his music and I've watched Merry Christmas Mr Lawrence and The Man Who Fell To Earth with fresh feeling, albeit one born from death.
One very sad aspect, meanwhile - and perhaps the key one - is of course that he was still producing, still writing, still singing and playing so well. Blackstar will now forever be seen through the biased prism of what happened two days after its release, but it is on any basis a complex and challenging experience, and in my opinion a clear proof of how we are robbed of more great work (unlike, say, Michael Jackson, arguably). I think it's 70% incredible and the rest is pretty damn good from someone in their late sixties who has been experimenting and innovating since the late sixties.

However, we scribblers on both sides of the Atlantic here want to celebrate him in particular for what he brought to the table in our corner of the universe. The left-field nature, the starry gazes and the individuality of the writers, filmmakers and artists often on the fringes, whom we all celebrate , and the genres we cover; all these in some fairly direct way link to what Bowie was preaching on alienation, transformation, discovery, fantasy and exploration of human life. 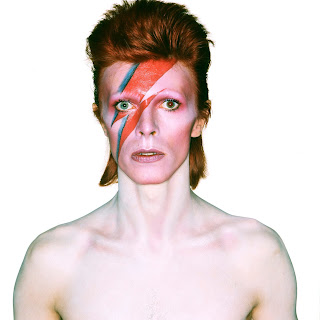 It would be all too easy to draw a lazy line in haste between some of the sci-fi space worlds we look at on the blog and his Life on Mars, Starman and Space Oddity. However there is no denying his appropriation of sci-fi and the era within which those pieces were composed. The Cold War loomed large, the 50s sci-fi of wonder and confidence, then horror and fear, mutating through the changes of the 60's and the rise of the counterculture and such writers as Ballard and Aldiss appearing in New Worlds and elsewhere, towards the 70s sci-fi films of, well, more fear, and the space programme was at its height. Indeed, Oddity was inspired by young Davie Jones's trip to see 2001 and was used by the BBC in its coverage of the first moon landing. The avowed bookworm and sci-fi fan who read Starman Jones as a child was throughout his life immersed in the writers we love at NOAF - always intrigued by the future as a way to escape our past and present, and always disturbed by how wrong the future could become. I do wish his 1984 musical had come to full fruition, for random example. What a lovely head-fuck that would have been. Lazarus, though, his parting stage gift, seems from what has been said, a worthy addition to his continued love affair with science fiction.

Despite some cocaine-led confusion and mania diluting his focus, Bowie was also perfectly positioned to warp the fading days of hippie fantasy and transcendental thought into the harsher political climate of the seventies and its subsequent darker look at humanity. 'Ziggy' and co were the ideal conduits for the confusion, paranoia and alienation of the time, as well as the hedonistic escapism which reached its zenith in some ways that decade. In addition, as his own escape to Berlin led to less character-based and more realistic, earthly lyricism, he was by then a world-famous emblem of counter-culture and transformative identity that he was easily morphed into the film actor Bowie even as he retreated from the spotlight in music. Often criticised as 'just playing himself' and credited as the very definition of pop starts failing as film stars, I and I think my colleagues here would firmly and passionately disagree. Watch his eyes and body in The Man..., watch the bubbling larva of emotion in that kiss in Merry Christmas... , look with clear, uncynical eyes at his dominance of the screen even when surrounded by Fraggle Rock  on acid in Labyrinth and his assured presence and frank sexuality in The Hunger and countless others. This was a fine (cracked) actor in full control of his performances. 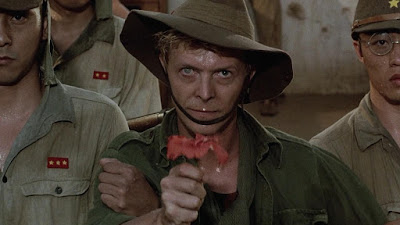 He pushed (along with, let's be fair, countless other creative souls of the half-century he worked within) the doors open for musical, social, sexual, gender and racial revolutions (albeit with some missteps in the last three and he was no alien to some disgusting sexual and narcotic-inspired behaviour, as several articles have more than illuminated recently); revolutions that continue to allow many of the writers we celebrate to do what we cherish here on this site. He also raised a son - and read him Dick and Wyndam - who is already a great sci-fi director, and championed and in some cases produced many musicians whose own work have soundtracked many great genre works, particularly in the 1990s (Massive Attack and Trent Reznor spring to mind), when again he pre-dated the pre-millennial dread of others and enjoyed the slight return to cyberpunk with Outside . He was also the Devil for Neil Gaiman's Sandman comic; this alone would merit a tribute on this site! It will be a long while before another creative force can give such a lengthy and successful yet combative, and eccentric, creative sourcing to so many, and yet the very memorialising we do today will ensure new generations will be turned on and turned inside out by him, and this will feed back into literature, music and film over and over. Long live the cheeky boy from Brixton...