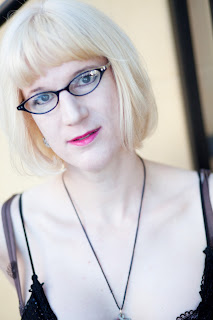 Charlie Jane Anders is the editor in chief of io9.com and the organizer of the Writers With Drinks reading series. Her stories have appeared in Asimov’s Science Fiction, The Magazine of Fantasy & Science Fiction, Tor.com, Lightspeed, Tin House, ZYZZYVA, and several anthologies. Her novelette “Six Months, Three Days” won a Hugo award.

I'm currently 2/3 of the way through Wake of Vultures with Lila Bowen, which is just an incredibly fun ride. It's a Western that feels exciting and brand new, and the plot twists keep coming at an amazing clip while the characters hook you. Nettie is a mixed-race girl who's kept as, basically, a slave on this broken-down old farm. Until she kills a vampire, steals his clothes, and escapes. Then she discovers she can see monsters all over the place. Great stuff.

I'm really thrilled there's a new Patricia McKillip novel coming at last, Kingfisher. She hasn't had a new book out in years, and her writing is so beautiful and vivid, and the story of a young man who rebels against his sorceress mother sounds incredible. I'm also very excited for The Everything Box by Richard Kadrey, which sounds like a real departure from his Sandman Slim series, but equally fun. And Manuel Gonzales, author of The Miniature Wife and Other Stories, is publishing his first novel, The Regional Office Is Under Attack!. It's about a team of female assassins who protect the world from supernatural threats, and I am IN.

In the process of promoting All the Birds in the Sky, I keep talking up Doris Lessing in interviews, because her influence looms large in my novel. (Not that I'm remotely capable of living up to her astounding legacy, but more like I'm shamelessly pilfering.) And I'm realizing it's actually been years since I read any of her stuff. I really want to re-read The Golden Notebook, which had a profound impact on me when I was a teenager.


4. How about a book you've changed your mind about - either positively or negatively?

I'm racking my brains and can't really think of a good answer for this, sorry.

There are so many. I already mentioned Doris Lessing. Everything by Douglas Adams, Graham Greene, Iain M. Banks, Ursula K. Le Guin, and a few others. But there's one book about writing that had a massive impact on me: Writing Well by Donald Hall. He's an incredible poet, but his writing handbook is incredibly forthright and brutally honest about the difference between good and bad writing. He absolutely will not let you off the hook for any bullshit or self-deception, and he's merciless about dissecting the problems with weak prose.

So glad you asked. All the Birds in the Sky is the story of two people who could have each been the hero of their own separate stories, but they don't necessarily seem like they belong in the same story together at first blush. Patricia is a witch who discovers she has magic powers as a little girl, and later goes to the school for the magically gifted. Laurence is a science genius who creates his own miniature time machine, and invents some truly odd gadgets like a sleepiness ray. They become friends in middle school, and deal with the horrors of adolescence and school bullying and various other nightmares, but there are bigger tests ahead, especially once they're grown up. And even as the book delves into the whole "magic versus science" thing, it's really about these two people trying to figure out who they are, and that question keeps bringing them back together. Even though they seem like they should have nothing in common. I don't know if my book is awesome, but it's definitely kind of different. I tried to follow Donald Hall's advice and keep my bullshit-meter turned up. I hope I succeeded.