Stone wings can indeed fly in this book of speculative poetry 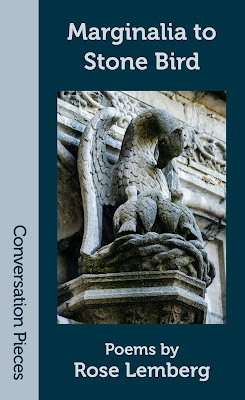 I like to think of poetry as one of the great (largely) unsung forms of SFF. Popular culture (movies, video games, etc.) tend to take top billing when it comes to Big Things in SFF, with novels behind that and comic books next and short stories a little further back still. Poetry suffers a bit from how most people come into contact with it: in school. And while many works that are literary canon are indeed fine pieces, few capture the possibilities of speculative poetry. Like it's something that people outgrow after they fall in love with it through the works of Dr. Seuss and Shel Silverstein and similar works. When poetry is strictly the arena for dry essays and agonizing class discussions about what a poem "means," it's small wonder perhaps that people take a look at poetry of an sort and turn away. But it is a shame.

Indeed, Marginalia to Stone Bird is a testament to how speculative poetry can succeed in capturing voice and plot and movement and feeling while still tackling big ideas and personal truths. The collection crafts a sort of map of forms and intents, a tour of what speculative poetry can be. From magic realism to high fantasy to far off-world science fiction, the poems range far and wide while maintaining a circling consistency, an interest in language and oppression and voice and freedom. And there's a lot to like here for fans of poetry in general or SFF in general, as it combines the best of both worlds. I've actually already featured "Long Shadow," which comes nearly at the end of this collection, in my Monthly Round (one of only two poetic works that has ever made a list I normally reserve for fiction). The poem, like many others here, shows a keen eye for storytelling and a great flare for making complex moral and emotional points.

The collection is divided into three parts, prefaced by a great introductory poem "Burns at Both Ends," which sets the tone well, the idea of throwing off the safe and protected in favor of being free. This sentiment echoes throughout, growing more and more complex as it passes through the three sections. In Finding Voice, the first section, the poems linger on language and translation, on immigration and movement. Here the poems stay a bit more grounded, showing journeys mostly through the real world but tinged with the magic of place and family and history. The poems remain a bit shorter, a bit punchier, and focus on the ideas of self-discovery, of being trapped and persecuted.

The second section, Changing Shape, brings in more of the fantasy elements, focuses on gender and defiance. The poems grow longer and the characters a bit more defined, reaching back toward fable and myth. The collection as a whole is nicely balanced, the first and the second providing distinct and strong contrasts that are to some degree harmonized in the third section, Making Journeys. It is in that third section that the poems finally let loose with world-building and connected narratives, where I found the collection to be its most formally daring and thematically impacting. Poems like "Earth Map" and "Write of fireflies" both express the freedom that had been frustrated in the first section and loosened in the second. These are not stories of transition so much as recognition that what we are does not have to be set in stone. Maps can be drawn freely, and conventions can be broken or adhered to as they fit, as they work. The danger is not gone, but there is here a familiarity with it, a recognition of it that...perhaps doesn't diminish the danger, but echoes that first poem, the defiance tempered now into a more precise weapon.

The third section also sees the most elaborate and robust poems, including the aforementioned "Long Shadow" and a number of pieces from the same setting. Rarely have I seen such world-building attempted in poetic form but it works here just as well as in prose, the characters alive, the feeling of the world palpable. For those who love poetry in their SFF, this collection is a perfect comfort and joy. And for those who try their hardest to avoid poetry, this collection might just be the thing to change your mind. Whatever the case, Marginalia to Stone Bird is affirming and strong, dense and magical and very worth checking out.

Negatives: nope, I got nothing here

Nerd Coefficient: 9/10 "Who cares about tepid? Better the sizzling / feathers of nightmares" [Burns at Both Ends] see our full rating system here.