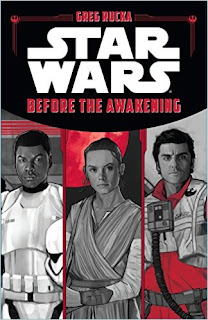 The best way I can describe Before the Awakening is a missed opportunity. It is a perfectly good read, entertaining enough as it takes the reader into the events shortly before The Force Awakens. After the unreadable mess that is Chuck Wendig's Aftermath, even passable is a huge upgrade for Star Wars literature.

The three vignettes are entertaining enough- Finn's in particular was quite fun, focusing on his training as a Stormtrooper, going into the connection he has with 'Slip' the trooper who dies in front of him and truly sets him on his path.

It goes a long way- sometimes, out of its way- to explain things we see in Episode VII-  where Rey learned to fly, learned to work on ships, and got her goggles. Which is fine and good, it just feels a little shoehorned in sometimes.

For that, though, Rey's story is certainly the best, and offers the most insight into her character. It is deeper than Finn or Poe's story, though Finn's tries- entirely too hard- to be personal. The problem with his story is that it tries far too hard to show how caring he is- aside from martial abilities (which have apparently evaporated by the events in the film), he is no Stormtrooper. In fact, that is an ongoing problem with all three- it works so very hard to have the characters be exactly as they are in the film, there is no actual development. There are events, to be sure, but they are just events. The characters don't advance as a result of them, they simply are.

The biggest missed opportunity, however, is one of the things I am quite sure the powers that be are working hard to avoid- politics. After being too heavy-handed with the prequels, I'm sure Disney & Company want to avoid complicating things too much, but I walked out of The Force Awakens with a lot of questions about the politics, and this book could have done so much to flesh out the political situation. Instead of focusing on what a soft touch Finn is, focus on First Order politics- or at least address them. Instead of focusing on what a bad ass Poe is, focus on the Republic and Resistance. Instead, the book just makes us really, really know that these are, in fact, the characters we see in the movie and little more.

(Hooooo, boy, settle in and bring a calculator.)


Baseline: I want to give this a 6, but I think it is 5- completely middle of the road- problematic, but has redeeming qualities.

Bonuses: +1 For not being first person. Lookin' at you, Wendig; +1 For also not being present tense. I actually want to give a thousand bonus points for this after Aftermath; +1 For being an overall fun, easy read.

Penalties: -1 For missing things about the setting & characters that would have been much more interesting; -1 for holy crap, I totally forgot to talk about this: In dialogue, numbers are all phonetic, e.g., BeeBee-Ate. Just... no.

Nerd Coefficient: 6/10. Still enjoyable, but the flaws are hard to ignore.

(For information on our ratings, and why six isn't a bad score, check out our policies)

Dean is the author of the 3024AD series of science fiction stories (which should be on YOUR summer reading list). You can read his other ramblings and musings on a variety of topics (mostly writing) on his blog. When not holed up in his office
writing, he can be found watching or playing sports, or in his natural habitat of a bookstore.