Game of Thrones Overtakes A Song of Ice and Fire

Disclaimer: this is an opinionated opinion piece where I say what everyone else is thinking but no one is saying. Consider yourself warned. 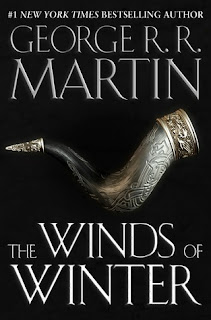 In case you haven’t noticed, GRRM recently announced that the sixth A Song of Ice and Fire novel: The Winds of Winter will not be published before Season 6 of Game of Thrones airs, surprising no one. He, and others in fandom assure us that this won’t really spoil the book series too much and we should all feel bad for George because he seems so depressed about it.

The show is ABSOLUTELY going to spoil the books! Anyone who says different is in denial. I think deep down inside we all sort of hoped that maybe GRRM would get the books out in time, or that HBO would say, “aw shucks guys, ok, we’ll do Dunk and Egg for a while.” Some, including Martin himself, attest that the show and books are two different entities at this point, and even though they will end up at the same place, the journey will be different. Again, no. If we find out from the show that Danny swoops down on Drogon spitting fire to destroy the army of white walkers attacking the wall and accidently melts the wall down and then the Others overtake Westeros and kill everyone…the book is spoiled. If we can’t figure out how to do that thing on Twitter where it blocks all tweets including the phrase “Game of Thrones” and JON SNOW LIVES comes across our feed… the book is spoiled. If in the show Sansa rises from the crypts of Winterfel riding the ice dragon… the book is spoiled, regardless how she finds the dragon.

Let me tell you something... George R.R. Martin is our bitch.

From the second he signed away the rights to the unfinished series, he had an obligation to his readers to finish the story before the show caught up. I understand that he doesn’t like deadlines, and I understand that he has other projects, and I understand that he feels bad about it all, but I don’t care. The show has, in my personal opinion, turned into a vile thing. With every season it continues to butcher the source material by reducing it to a series of television tropes. It has negatively changed the storylines of many of the main characters, turning some of the series’ strongest female characters into victims of rape. I’ve written about how problematic this trope is before. It makes me especially mad in the case of Sansa. Critics argue...what does it matter if it was Jeyne or Sansa? It matters a lot because Sansa is a main character with influence in the story, and she now becomes a product of overcoming sexual violence and her arc here on is thus defined by Ramsay’s actions. In fact, I’m sure the viewers already figured how horrific a character Ramsay was and we could have done without a rape all together. Speaking of, how about that god awful scene where Jamie rapes Cersei in the Sept of Baelor in Season 4? In the books we’re supposed to have grown to sympathize with Jamie and not like Cersei or approve of her actions. Twisted by the show, we are expected to feel bad for Cersei and all the adversity she has to overcome, like being raped by her brother. No. Oh, and, lets not forget that they recently burnt a little girl alive, just in case the rape of Sansa didn’t hit the shock value quota for Season 5.

And, really, I’m okay if the show wants to diverge from the source material (not okay with the added rapes and child burning though) given that the source material remains just that, the source material. Now though, this has all changed. From this point forward the books will be a divergence from the show, not the other way around. I only watched one episode of Season 5 because I wanted to see Arya enter the House of Black and White (which ironically was barely even a speck in the episode titled “The House of Black and White”) and I still know all the controversial crap HBO pulled this past season, just by being on the internet. It is going to be really hard to NOT have the show ruin the upcoming books for me, and this makes me really sad.

Sure, the show is a wild success and many people (book readers included) really enjoy it. But I’m not one of them. I think I speak for many fans when I say that I have invested a lot of time and emotion into A Song of Ice and Fire and I am SO sad that GRRM is not going to be the one to tell me how it all ends—or even if Jon Snow lives, and who his parents are, and if Arya ever sees Nymeria or her family again, and what happens to Bran, and so many other things.

This feels like the end of a ASOIAF as we know it. What motivation is there for an author to finish a story once the future of so many characters' arcs and the greater plot itself have been revealed? And how can he truly write unbiasedly once the show airs? Together, GRRM and HBO have ruined what is arguably one of the greatest and most influential works of modern fantasy. I don't blame HBO since they're a corporate money grubbing conglomerate, but I do blame Martin and his publishers and his lawyers. This should never have been allowed to happen contractually.

-------
POSTED BY: Tia   Nerds of a Feather contributor since 2014 who really needs to figure out how to do that thing on Twitter in a vain attempt to gain some semblance of control over not being spoiled by Season 6