I recently glanced at my calendar and realized that things are about to get very busy for me.  In addition to trying to pack up my house in preparation of my move back to Austin, I have International TableTop Day, C2E2, Free Comic Book Day, and then San Diego Comic Con.  With nerd culture becoming more and more mainstream, these events are only going to continue to grow.  While this isn't a bad thing, I am going to have to do a better job of passing on some amazing events or convincing my family that we should time our vacations around the upcoming convention schedule.  #NerdProblems. 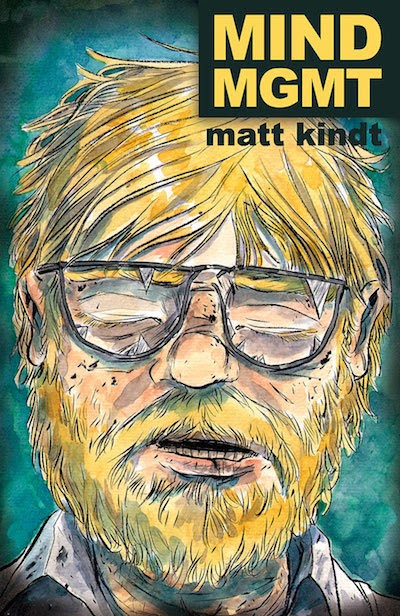 Pick of the Week:
Mind MGMT #31 - The final arc is here.  From the rise and fall of Henry Lyme, to the incredible character arc of Meru, the final battle is moments away.  In an extremely touching issue, which features a recap of the difficult life Meru endured and a stunning redemption from Lyme, Kindt tones down the action and really gets to the core of this story.  The relationship between Lyme and Meru is central and the scene in which Lyme seeks his redemption is absolutely stunning.  It brings the reader back to the first arc and was refreshing to read given the violent battle that has been taking place for some time.  Now I really want to go back and start this series from the beginning.  Well done Mr. Kindt!

The Rest:
Chrononauts #1 - The big release of the week definitely lived up to the hype.  Mark Millar and Sean Murphy team up to tell us the story of Dr. Quinn and Dr. Reilly, two scientists who have invented time travel suits.  The time travel experiment began as a satellite that provide a video feed, in a hilarious scene broadcasting from the Civil War, but the action picks up when the duo attempt to jump back to observe Columbus discovering America in 1492.  The crass humor of Millar and the gritty art of Murphy are a perfect combo in what is sure to be another hit for Image.

Princess Leia #2 - Leia and Evaan embark on their first rescue mission in an attempt to save the people of Alderaan who remain scattered across the universe.  Their first mission is on Naboo and is exciting with a phenomenal twist, but this book shines in the flashbacks of Leia as a child.  This type of insight is fascinating and Mark Waid does a nice job establishing moments from her past that inform us of the woman she currently is.  Definitely worth the price of admission.

Giant Days #1 - John Allison, Lissa Treiman, Whitney Cogar, and Jim Campbell deliver a solid and charming book about three good friends and their first year in college.  Daisy Wooton is the awkward one, Esther DeGroot is the mysterious and interesting one, and Susan Ptolemy seems like your average 18 year-old starting a new life in college.  Overall it was charming, humorous, and a nice change of pace from the other titles I picked up this week.  There were moments that were Scott Pilgrim-esque and I quite enjoyed this book.