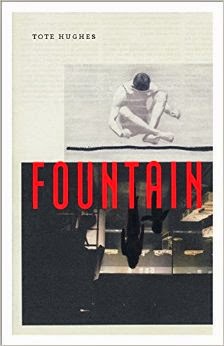 When Pinson Charfo wakes one morning to find a strange note at his bedside from a Mr. Ralfo to a Mr. Cormill, neither of whom he knows, it proves to be the first in a series of odd clues designed specifically for him to follow, embroiling him in a complex mystery featuring plagiarized manifestos, narcotized cultists, the search for pornographic prints, and a busted fountain whose runoff forms an underground lake beneath the never-named city's unsuspecting feet. Tote Hughes's Fountain is a metaphysical detective story unlike any other, a comic tour de force set in a labyrinthine world of shifting signs and dreamlike insolubility.

Reading Fountain by Tote Hughes is kind of like watching Johnny Depp in Fear and Loathing in Las Vegas. I won’t say that it’s like reading Hunter S. Thompson because, well, nothing is like reading Hunter S. Thompson, but Fountain has that wonderfully bizarre but ingenious feel that leaves you on the edge of your seat grasping for more. Within in the first ten pages I laughed out loud at least five times, not because Fountain is a comedy, but because it is so absurdly witty.

Fountain is detective story of sorts. Pin has quite a few mysteries to solve, such as where did the note in is bed come from (did he write it in his sleep?), why is he being accused of plagiarizing a manifesto he knows nothing about, and how is he going to acquire those disreputable prints for his employer? There are some otherworldly elements to the story as well, like the mysterious underground waterway and its nylon cord bound traffic barrel wearing inhabitants.

Fountain is only available in print form, and I would like to take a minute to acknowledge the physical book itself, because I was immediately struck by its beauty and artistic design. The introductory pages are very clever, the margins allow for comfortable thumb room, and the font is inviting. Needless to say, I was not surprise to discover that Fountain is the product of a university press. Upon some investigation, I learned that Miami University Press, who only publishes two or three works a year, holds an annual novella contest and offers a standard contract and publication as reward. Tote Hughes’ Fountain was the 2014 winner among a pool of over 90 manuscripts.

That said, this book may not be for everyone. You definitely have to be into witty, weird, intellectual, reality bending adventures to truly appreciate Fountain…but if you are, I don’t think you will be disappointed. It is not easy to pull of this style of writing, but Tote Hughes succeeds wonderfully.

Oh, and you’ll be happy to know, Fountain validates its existence by being no more than two hundred and two pages long, though I don’t think it will fit into the back pocket of your skinny jeans.

Bonuses: +1 making me laugh out loud on many occasions, +1 for succeeding in writing style