A Gothic collection with some very modern sensibilities. 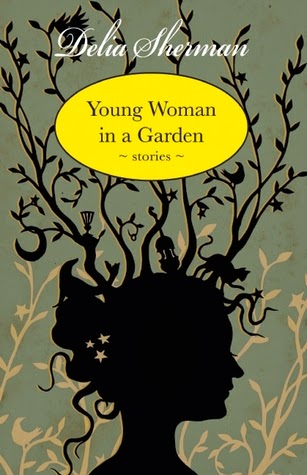 It's rare that a single author collection of stories like Young Woman in a Garden presents a strong and unified voice. Especially when the stories are taken from across decades of an author's career (as this one is). Most of the time I would expect a number of stories to just not fit with the rest, some that feel forced into inclusion. With Young Woman in a Garden, though, there is a very consistent style and charm that infuses the stories, that gives the collection a more singular feel. It's not the time period that the stories take place in, because the stories do move from present to past to distant past. Nor is it the choice in characters, which range from male to female, straight to queer, human to something else. Instead there is a hint of what I'll call the Gothic in these stories that creates a common thread linking them all together. And everything is grounded very firmly in fantasy (or perhaps magic realism, to be more specific).

Because these stories are quite concerned with the past. It leaks from the pages by the choice in language, giving the stories a certain age to them, a feeling that evokes work of Gothic Horror. Again and again the proper world of upper class, educated men and women clashes with the raw, with the natural, with the supernatural. In "Young Woman in a Garden" an Impressionist painter's spirit possesses a student staying in his old home to study his life. In "The Ghost of Cwmlech Manor," a story steeped in steam technology, a maid must help her young master with the help of the ghost of one of his ancestors.

Time and again the stories show science and magic meeting and mingling, erasing the borders of what is fantastic and what is logical. In "Miss Carstairs and the Merman," for example, a female scientist at a time when women were not encouraged to enter into the fields rescues a merman from the shore near her home. The creature sparks her scientific curiosity, as she studies it and tries to understand it, and yet her growing obsession is not with scientific research but with the magic it possesses that allows her to experience the sea as it feels it. In "Walpurgis Afertoon," a house appears in a suburban neighborhood overnight. Even more shocking, though, are the women who live in the house, women who don't like the term witch and who blend science and magic to create stunning gardens and porcelain cats. The main character, a botanist, finds herself at first resistant to the idea of magic, but as she begins to experience it she realizes that there is no natural barrier between the two.

Perhaps the collection could have been called "the world is more dark and beautiful than we know." Many of the stories, after all, are not particularly happy ones, though most have hopeful endings. They take the form of faery stories, or fables, with a heavy dose of violence and darkness that is cut by the indomitable wills of the characters. And, of course, manners are quite important as well. There's just such a charm to the voice of most of the characters, to the way things are described, that makes the conditions aboard a sailing ship at the same time utterly terrible and just also, somehow, a little bit magic. Like magic is lurking behind every corner, in every deep water we can't see into.

That said, it's also a rather ponderous voice that dominates the collection, a voice out of the past. Which will probably not be to everyone's liking. Some of the stories do seem to drag a bit because the language, while well rendered and while (I think) contributing to the aesthetic of the piece, can seen a bit dull. In good Gothic fashion, the fantastic is often lurking unseen for a time, revealed in fits and starts and for some of the stories I think it works brilliantly. My favorite story in the collection, "The Faerie Cony-Catcher," employs that style as it sets a more mundane tone for quite a while before pulling back the curtain on magic. Which works for the story, because it makes the magic really pop when it finally arrives, a glowing stone suddenly revealed in the mud.

Overall, I think Young Woman in a Garden delivers for fans of fantasy and magic realism and even Gothic horror. In most of the stories there is a strong sense of isolation, loneliness, and in most there is also a hope that loneliness gives way to companionship, to happiness, if only briefly. But in those moments of companionship the veil of gloom is lifted, sometimes forever, as lives interact and magic flourishes. It's a lovely collection, with a strong shadow running through it, and a plethora of diverse characters and enchanting settings and stories. While it reads a bit dry for fans of action and adventure, it manages to stay very focused in its scope and powerful in its execution.

Bonuses: +1 for a unified style and tone throughout

Negatives: -1 for some dense language and (sometimes too) slow pace