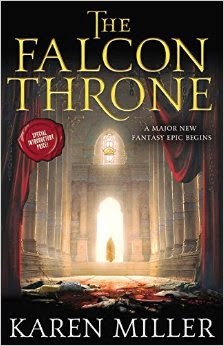 The Falcon Throne is a political epic fantasy that takes place in the medieval realm of The Tarnished Crown. This first installment in the projected quintet by Karen Miller centers on the neighboring Duchies of Harcia and Clemen, and the neutral territory of the Marches in between. Belfre, unruly heir to Harcia, dreams of reuniting Harcia and Clemen under one king (him), while his younger brother Grefin just wants everyone to be happy. Meanwhile in Clemen, the disavowed Duke Harald is usurped by his bastard cousin Roric, who also just wants everyone to be happy. Harald’s son Liam, believed dead, stews in the Marches awaiting his rise to glory, while a prince thought long gone does the same.

The world building is solid but not complex. We have courts and jousting and travelling merchants and people from various places who look different depending on their origin. There are downtowns and districts and healers and witches. Half way through we get Exarches as well, which I am assuming are priests of the new religion that exists in contrast to the old “pagan” ways, but no one seems to like them or their religion so I’m not really sure. Anyway, the story itself is intriguing, albeit not original: courtly politics and heirs thought dead, waiting to grow up and reclaim their thrones (sound familiar?).

The foundation is good but unfortunately the delivery falls short. The telling of the story is very one-dimensional, as there are no hidden layers and Miller doesn’t let us figure anything out for ourselves. We don’t need to worry if someone is lying, because we are told in the next line “he was lying,” and we don’t need to wonder if the letter was a fake because the text quickly states “the forged letter.” This is good in a way I guess, because since the book is fairly long (almost 700 pages) it allows you to more or less graze over dialog without absorbing every word, knowing that you’re not going to miss anything. This type of read is needed here, because the characters are all very flat and rather uninteresting. Everyone is either mean or nice, good or bad, no in between.

The lack of character development is most noticeable with the women. I get it, it’s a patriarchal medieval society and they think of women as horses, valued only through their bloodlines and ability to reproduce. I’d be okay with that if Miller didn’t give us the female perspective, but once we get inside the women’s heads we discover that all they think about is sex and babies. Well, unless they’re an older woman, then they are just crotchety and mean. Almost every adult female character has some sort of relationship to sex and a baby, even if it’s a dead baby’s head that tells her who to have sex with. There is one female character who, upset with her father’s choice of arranged marriage, exacts her revenge by taking birth control (baby) and committing adultery (sex). Yes, because she was forced into a loveless marriage she seeks to deny her husband a rightful heir and deceptively put the son of her lover on the throne (sound really familiar?). The only female character who shows any signs of hope is Catrain, but every time she does or says something independent her mother scoffs and likens her to her father.

My final issue is kind of petty, but worth mentioning because it really effected the ease of read for me. I’m not a language prude and I like a good, well-timed curse as much as anyone, but the word f--k is used so much in this book that it is jarring. It doesn’t fit in the context of a medieval setting and I really wish Miller would have developed a world-specific expletive to use it its place (Hood’s balls!). I’m sorry, I just can’t picture dukes and lords walking around saying f--k, f--k, f--kity, f--k all the time. Also, “feggit” is constantly used as a slur among the common folk, as in “don’t be a feggit,” and this really bothers me too. About half way through the book we do get a world-specific expletive (cockshite) and I really wish Miller would have gone back and did a find and replace for all the feggits.

All in all though, once I got past these misgivings and accepted it for what it was, the story and its world were captivating at times. The prologue initially grabbed my attention and when that storyline started to creep back in it left me wondering what was going to happen next and kept me reading on. Because you don’t need to hang on every word, The Falcon Throne is a book that can be blown through on a rainy weekend, despite its length, if you don’t have anything better to do. But remember, this is just the first in a five-book series.

Penalties:  -2 for giving women a voice and doing NOTHING with it
-1 for too many f--ks and feggits