Microreview [book]: The Dirty Streets of Heaven by Tad Williams

One hell of a good time 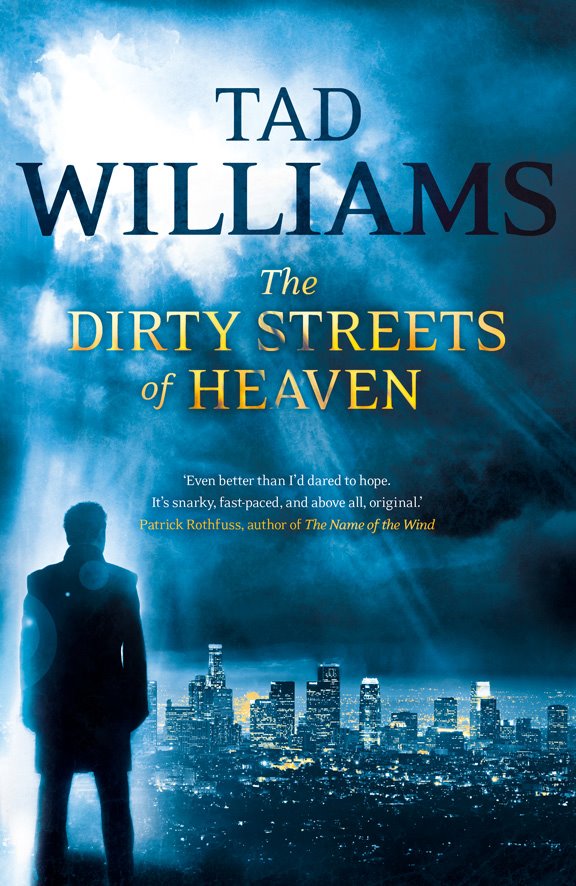 Today we welcome Tia, one of our new Nerds of a Feather! Tia is a writer and editor who loves reading vast epic/high fantasy tomes, urban/contemporary fantasy, and some science fiction. She is a big fan of re-reads and believes that you can't really know a series until you've read it more than once.

Bobby Dollar (a.k.a. Doloriel) is an existential angel stationed on Earth, working as one of Heaven’s advocates for the souls of the recently departed. But ‘life’ as an angel isn’t as glorious as it may seem. Bobby struggles with issues of his own, such as an ignoble past, failed relationships, and a taste for vodka. But when the souls of the recently dead stop showing up for their heavenly (and hell-ly?) judgment hearings, well that’s when things start to get weird. Bobby begins to discover that Heaven and Hell aren’t always as black and white as they seem and finds he may have to take matters into his own hands to get the answers he seeks.

Yes, angels in human disguise and demons in business suits is so Dogma-esque that it seems contrived, if not plain trite, and The Dirty Streets of Heaven has all the potential to fall flat on its face…but it doesn’t. Somehow Tad Williams makes this work, which I guess is a testament to his legacy as a well-respected and established author in the field. Here, Williams takes a current cultural system and presents it as mythology. The usual suspects are all present (angels and demons) with an established hierarchy on both sides. The quintessential war between Heaven and Hell is also here, except violence is now forbidden among the factions and the war is waged over the souls of the recently departed, Judge Judy style.

There is one word to describe this read: Fun. The story is told in the first person from the point of view of Bobby Dollar, a snarky, somewhat cynical advocate angel who in my head looks like a combination of Iron Man Mickey Rourke and Pulp Fiction Bruce Willis. The story takes place during modern times in the fictional city of San Judas, in the Bay Area of California. It’s a fast-paced, page-turning but not quite oh my god (no pun intended) I can’t stop page-turning, urban fantasy that morphs into a sort of hybrid whodunit thriller. Here, Williams plays on some of contemporary society’s preconceived notions about religion and faith, and even throws in a little pastiche for good measure. In one scene at the local, angels only watering hole, the bartender slams the till shut with an audible “ting,” and Dollar’s best friend Sam (Samariel) says “look, Daddy” in a squeaky little child voice “teacher says every time a bell rings an angel gets his wings.”

But the story isn’t mindless or corny and it tackles some of life’s biggest questions, like Why am I here? What happens when I die? Does what I’m doing even matter? Bobby Dollar of course is plagued by a lot of these issues. He’s never even met the big guy upstairs and is having trouble taking the word of his heavenly superiors at ‘face’ (it’s funny because they don’t have faces) value. Every time he visits Heaven, Dollar questions whether the souls there are actually happy, as they just kind of float around and eventually seem to fade out of existence. This is all pretty harrowing for Bobby since his current job is to ‘fight’ Hell to get these souls into Heaven in the first place.

The book does, however, have its issues. The characters are all rather stereotypical, for one, Bobby Dollar not excluded. He’s a fast-talking, alcohol-drinking, woman-loving, Dick Tracy type who has a disgruntled best friend that isn’t much better. Then there’s the new kid, who obviously serves as an info dump receptacle while they show him the ropes. And please, let’s not forget the love interest, who is first introduced to us sporting a “fetish schoolgirl look” (that’s a direct quote people). But I’m okay with all of this, because it works here. So much of today’s fantasy is super serious and pushes the boundaries of the genre that a story that is fun, fits within the confines, and is done right is sometimes welcome. And Williams does push boundaries here, just not so overtly. In The Dirty Street of Heaven, with a contemporary system presented as mythology in such a nonsensical way, we are almost forced to laugh at the world we live in and to remember that maybe we’re not so different from those who came before us after all. Substitute Norse or Greek mythology for what I have been avoiding calling Christianity the whole review because that’s not really what it is but I don’t know what else to call it and the story would read the same.

Overall, The Dirty Streets of Heaven is a fun, intelligently written urban fantasy that takes a not-so-original concept and successfully draws the reader in and keeps you guessing. However, it doesn’t leave much wanting and it doesn’t send me running off to grab the next book in the series. It probably would have done fine as a stand-alone novel. Time will tell if Bobby Dollar’s charisma survives across multiple books or if it just becomes stale in the end.

Penalties: -1 for not really challenging the preconceived notions of Hell, -1 for somewhat unoriginal characters