Temperatures have finally picked up and San Diego Comic Con will be here before I know it.  There have been quite a few reveals about this year's con, but I am most excited to hear that there will be a Gravity Falls panel.  The show has a great super natural feel to it and isn't a terrible segue into this week's books.  Genres rise and fall within the medium of comic books and it appears that horror comics are trending upward currently.  This week features some incredible tales of horror and I didn't even get a chance to read the Wake 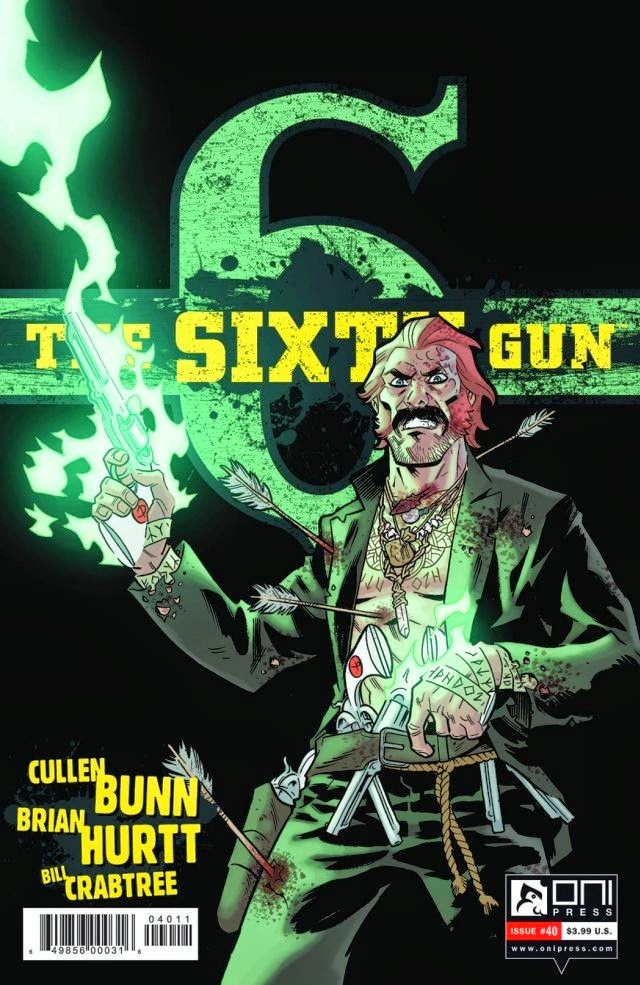 Pick of the Week:
The Sixth Gun #40 - Becky Montcrief never ceases to amaze me.  The arc of her character has been a joy to read and I love seeing how far she is from the young lady who was dealing with the death of her father when this series began.  Her actions in this issue set the tone for what hopes to be an epic conclusion to this masterpiece.  The situation for Drake and company has never seen so bleak.  Part of me wonders if Bunn has a sad ending to this story or if Ms. Montcrief can save the day.  I hate to admit it, but I don't think Drake is going to make it out alive.  He appears to be out of ideas, Jesup may be the most formidable foe that the crew has faced (thanks a lot Griselda), but I think Ms. Montcrief has seen the future and has a plan for how to keep Jesup from using the six.  At least I hope she does.

The Rest:
Nailbiter #1 - Welcome to Buckaroo, Oregon, home of 16 serial killers and a struggling tourism industry built on that fact.  Edward Chalres Warren, aka the Nailbiter, was acquitted of the atrocities he inflicted on many, and moved back home.  Detective Carroll, who arrested Warren, has returned to town to investigate a theory and reaches out to an old friend for help.  Finch, a man at the end of his own rope, reluctantly agrees and learn that there is more than a coincidence to the fact that 16 serial killers all hail from the same town.  I am really digging the premise and the art is as horrifying as it is stunning.  If the book can live up to its premise and what it establishes in issue 1, this will be a series that you won't want to miss.

The Woods #1 - Horror comics seem to be all the rage this week and The Woods does a nice job of putting a new twist on the genre.  An explosion rocks a high school and is transported to an alien world (or a moon as pointed out by Benjamin).  The teachers and principal urge everyone to remain in the school, but Adrian recognizes a sign from the alien beings.  In addition to the interesting plot, the characters appear to have more depth than your cookie cutter variety and the issue is filled with some genuine laughs to mix in with the terror and mystery.

Bad Blood #5 - The conclusion to this vampire poisoning tale somewhat let me down this week.  While I still enjoyed it, I felt that more questions needed to be addressed.  It was hard to top the big reveal from the last issue, and the twist in the conclusion did not have the same impact.  The series is still worth your time and if you haven't read it I would encourage you to either pick up the back issues or check out the trade if it is ever collected.  Nice take on a tired genre and worth your time and energy.

Original Sin #1 - While not horror per say, the new Marvel event is a murder mystery full of intrigue.  The Watcher has been murdered and had his eyes swiped.  Whoever is behind this evil plot seeks to open the Watcher's eyes and use them to his or her own benefit.  There is an assembly of superheroes and a classic whodunit plot.  I was hyped up about this series after the Marvel panel at C2E2 and this issue did not disappoint.  Definitely does not feel like the usual Marvel event.