San Diego Comic Con is still quite a ways off, but the nerds are already raging.  Ace Parking released its parking passes for the Con and true to SDCC fashion the fans crashed the site and were quite upset.  As a father I try to teach my kids not to get upset over things that are out of your control and to find the positive in the situation.  So you couldn't get parking despite trying your best.  San Diego is a big city with ample parking.  Sure it might not be the most convenient, but try to remember that you are lucky enough to be attending SDCC in the first place.  Sorry you had a rough go Ace Parking.  I thought you did alright. 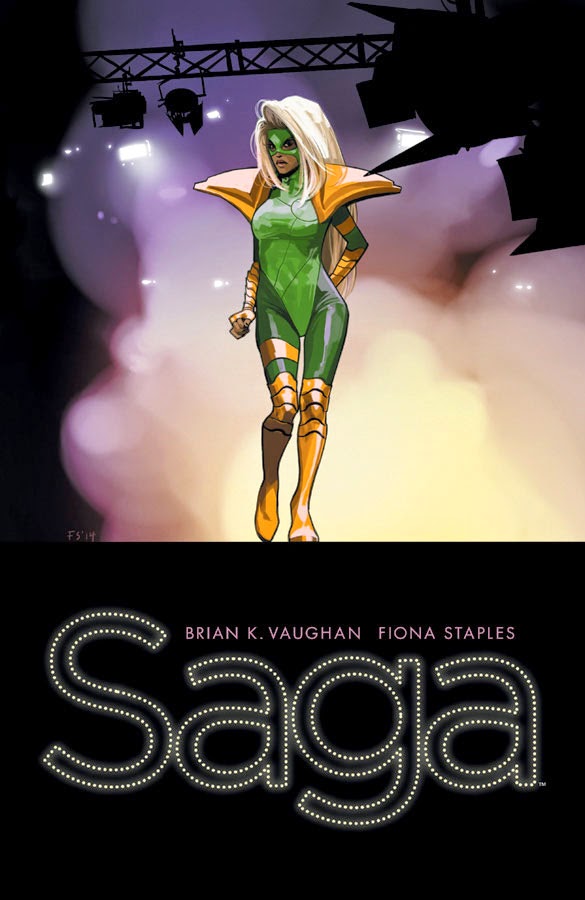 Pick of the Week:
Saga #19 - This comic isn't fair to the other books on the market and Fiona Staples is a saint for the work she does on this series.  The opening panel is both shocking and beautiful and I love how this series is pushing the envelope.  Getting a peek into The Robot Kingdom at the start of the book was a treat and made me sympathize with a group of aliens that were initially portrayed as villains.  A spin-off that focused on the life of Princess Robot and her child would make a compelling series of its own. The subtle humor mixed in with a compelling drama and a cast of characters that have such depth and complexity.  A lot happened in an issue that felt both light and brief.  Not sure how Brian K. Vaughan does it, but I have a hankering to go read Y: The Last Man again.

The Rest:
Axe Cop: The American Choppers #1 - It brings me great pleasure to see Axe Cop return to print form.  What could possibly make Axe Cop even better?  A team up featuring some of the best axe (not chainsaw) wielding superheroes that have ever graced the pages of a comic book.  This new miniseries from Dark Horse stays true to Axe Cop form and is an absolute delight to read.  As the parent of a soon to be 7-year old I can truly relate with the wonderful imagination of Malachai Nicolle.  I should also admit that I would love to see a Captain Planet (the planet from which all captains are from) spin-off.

Daredevil #3 - Daredevil is still adjusting to his new San Francisco digs and is up against a formidable foe in the Owl.  Mark Waid steps up the funny for this issue as his run with Daredevil continues to be plain fun.  Waid also is great with mixing in real drama and fear with his humor.  The book remains light, but it seems like Waid has big plans for Daredevil in San Francisco.  Nothing beats Daredevil acting tough and dropping a Lying Cat reference.  "BZZT. Lying Cat says 'Lying.'".  It's funny because it's true.  That is something that Lying Cat would totally say upon hearing the lies of Shadow Man.


Original Sin #2 - The hunt for the murderer of the Watcher continues as the holder of the eye is finally revealed.  While I enjoyed the action on the surface, the detective work that was taking place underground was the highlight of this issue.  So far one of the more compelling Marvel events by a long shot.  When the bomb drops I truly hope this series lives up to the hype.