I had an amazing time at C2E2 this past weekend (look for a post later today) and couldn't be more excited about Marvel's next big event.  Normally I don't get too excited about big events like this, but after learning the plan it is my hope that this one will actually have a lasting effect on the universe and will be one that could potentially bring in new fans to the comic book world.  On top of that, Free Comic Book Day is this Saturday and you should click the link here to find a participating store in your area.  Who doesn't like free comics? 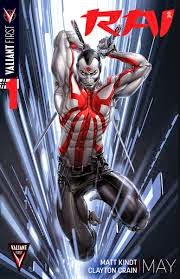 Pick of the Week:
Rai #1 - If you are a sci-fi fan and enjoy the writings of Phillip K. Dick and Isaac Asimov, then you will enjoy Rai.  Set in Japan in the year 4001, the first murder has taken place in over 1,000 years.  Tensions are at a breaking point as a group of rebels, the Raddies, want the Positrons (PRs) set free.  PRs are manufactured androids with an extremely powerful AI.  You are given one when you turn 15 to help out around the house, companionship, etc.  It is one of the tools that the Father, the ruler of all of Japan, implements to keep the population under control.  Something tells me that the Father may have other reasons for populating his country with these androids.  The murder is a ground breaking event that calls in the nation's greatest protector, Rai.  Rai, who appears to be a PR himself, has a rebellion to stop and a murder mystery to solve.  Featuring fully painted interiors from Clayton Crane that are simply stunning and written by Matt Kindt, this is on course to be a phenomenal title.  Valiant is doing some good stuff right now.

The Rest:
Chew #41 - One of the final arcs of Chew has begun and I am chalk full of mixed emotions.  On one hand, it began on a positive note and sets the stage nicely for a final showdown between Tony and the Collector, but it also means one of my favorite books is coming to an end.  Weaponized chocolate, a Vegas wedding, beet flavored vodka, and a Poyo teaser that has me salivating for more Poyo.  Love that bird and would never think twice about crossing him.

Star Wars: Rebel Heist #1 - Quite the week for Matt Kindt.  In addition to his other debut, Kindt offered up a new Star Wars title for Dark Horse that I think he had been secretly hoping to write his entire life.  Not to assume too much, but I would wager that Mr. Kindt is a Han Solo fan.  I would go so far to guess that he has dressed up like the rebel in the past and was salivating at the chance to write him.  This issue opens as a love letter to the man with the swagger and takes a surprising turn at the end.  It was fun to delve into the psyche of a new rebel recruit and gain a perspective on Solo that I hadn't had before.  Looking forward to issue #2 and seeing his take on Leia.

Hacktivist #4 - Alyssa Milano wrapped up her hacker thriller in exciting fashion and I for one am impressed with her first run with a comic.  This series has been pulse-pounding run as the Tunisian people attempted to stop a corrupt government.  The conclusion did surprise me, in a good way, and I am happy to read any future comics penned by Ms. Milano.  If you dug Hackers back in the day or are addicted to social media, look no further than this title.

Southern Bastards #1 - Jason Aaron and Jason Latour have a frightening new book that takes place in small town Mississippi.  The coach runs things in Craw County and keeps the peace with his Runnin' Rebels.  Craw County is the type of town where high school football is king and I imagine that if you wanted to relive the glory days you could "play" for this coach character.  Earl Tubb is back in town to pack up his dad's old place and finds his home town full of corrupt locals who don't take kindly to strangers.  As the former son of the Sheriff who was brutally shot fighting against this corruption, I think Tubb has a chip on his shoulder.  I also imagine he is going to enjoy reclaiming his home through brute force. Dark, gritty read that I highly recommend.