My Comic Con schedule is starting to come together.  I will once again be missing preview night to attend Hop Con and enjoy w00tstout 2.0.  The first annual Hop Con was one of the big highlights of last year and I am looking forward to drinking some tasty brews from our good friends at Stone.  In addition to Hop Con, I secured a ticket to Funko Fundays and have no idea what to expect.  It should be fun as Funko always has amazing exclusives and word was that this event last year was a blast.  With no Locke and Key or Fables panel, I am not sure what is in store in regards to actual comics (yes, there are things related to comics at Comic Con).  I am sure that there will some gem of a panel that will Bart my world. 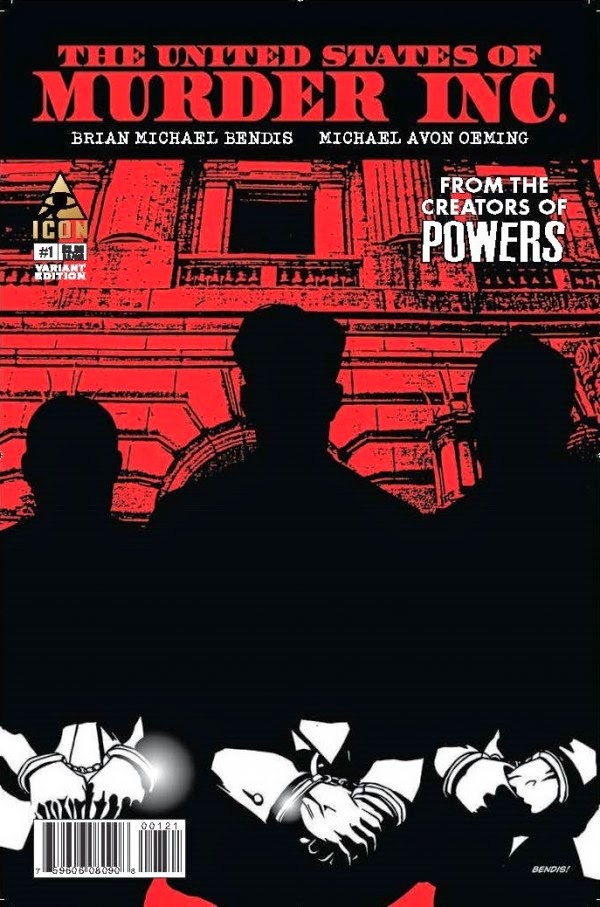 Pick of the Week:
The United States of Murder Inc. #1 - The duo that brought us the magic that is Powers have teamed up again in this thrilling mob drama.  The entire northeast of the United States has been signed over to the mafia and divided into territories.  Valentine has just sworn the blood oath and join one of the most powerful organization in the territories and embarks on his first mission.  This mission takes him out of the territories for the first time in his life and he finds himself in D.C.  Things don't go according to plan and the twist at the end of the issue will leave most readers salivating for more.  Michael Avon Oeming's art is perfect in its portrayal of the seedy underbelly that is organized crime.  His style for action sequences fit the mysterious plot that Brian Michael Bendis is weaving.  This is a no brainer for fans of Powers, but even if you are not familiar with Powers (go pick up the trades!), this is a phenomenal start to what I hope is a long ongoing series.

The Rest:
Shutter #2 - With its stunning Wes Anderson inspired debut behind us, Shutter 2 goes full acid trip to set the scene for Kate and her predicament.  She finds herself in a shootout between rival anthropomorphic gangs.  The action is fast and furious and the art is simply stunning.  If you are looking for a book that is different and easy on the eyes, Shutter is a great option.  The big question at the center of the book thus far is why is everyone trying to protect Kate? What is this news about her siblings?  The mystery surrounding Kate and her past is the hook, the current state of her world is the eye candy.  The character design is some of the best I have seen in some time.  I am still on board with this one.

Stray Bullets: Killers #3 - Once again David Lapham delivers a stellar issue.  What I love about the Stray Bullets series is that each issue can be enjoyed on its own, but are enjoyed on a greater scale if you read the entire series.  Issue #3 focuses on why you shouldn't babysit for a gangster who is notorious for ripping people's fingers off.  Lapham's books feel too real and are uncomfortable to read, but are utterly compelling and I urge you to pick up this series.  Amazing use of the comic book medium.

The Walking Dead #127 - Quite a bit of time has passed between the conclusion of All Out War and the new arc.  Alexandria is a thriving community and the group has grown and become more efficient in steering zombies away from them and in raising their own food.  Things almost seem to good in this issue and I am sure that Mr. Kirkman plans on pulling the rug out from under Rick in the second issue in this arc.  I will say that is was nice to read a non-dramatic issue that sets the scene for a new direction for this series to take.  Looking forward to #128.

The Auteur #3 - Rick Spears is a demented individual.  His creation is one of the most bizarre and offensive things I have read and I can't get enough.  In the third issue of The Auteur, Nathan Rex learns why hiring a serial killer to spice up your horror flick may not be the best idea.  Packed with nudity, gore, nudity, and more gore, this issue should appeal to fans of vintage B cinema.  As I said with issue #2, I don't think I can recommend this series to anyone, but if you are not easily offended and want to read a genuinely entertaining series then this warrants your attention.

Superman: Doomed #1 - There have been some rumblings about why I should pick up this title and decided to buy a Superman comic for the first time since the launch of the New 52.  Very glad I did as the creative team behind this event have some exciting things in store.  Doomsday has returned, but he is bigger and stronger than before.  Each time he teleports to a new area, there is a massive loss of life and he is even bigger when he appears again.  The premise at the end of the issue is an intriguing one that may steer me to pick up the next issue of Action Comics.   Nice one-shot that is worth your $4.99.