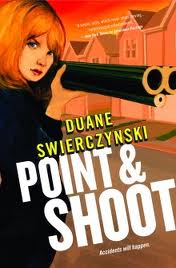 Book reviewers (hobbyists, at least) have it made. We read and comment on books we love [books that we would have probably read and commented on anyway!], and then blissfully buy new bookshelves to accommodate our growing collections. We can get highly anticipated debuts even before they hit the store shelves. And did I mention that we get free books? Unfortunately, however, there are some... pitfalls... to be a bit melodramatic. Every now and again, we are sent the last book in a series that we have not read. In these cases, how can we assess the book in relation to the overall series? How can we ensure impartiality, especially given the fact that final volumes are geared toward long-time fans? This is the problem I am encountering with Duane Swierczynski's Point and Shoot. After all, I am being asked to review a book that does not really work as a standalone novel. Does this make me more impartial, or less?

Point and Shoot is the third and final installment of Swierczynski's [apparently] delightfully fun Charlie Hardie series. Charlie Hardie, the reader learns, has been involved thus far in a number of earth-shattering, world-saving missions, fighting against a Cabal that aims at nothing less than total global domination. The book begins with Hardie trapped on a low-orbiting satellite, 500 miles above the Earth. Hardie is paying the ultimate penance: he must spend 12 months as a guard dog in the satellite, or the Cabal that sent him there will kill his wife and son. But things start to go wrong when someone docks on the satellite, and tells Charlie that he is guarding some of the world's most dangerous secrets. Making matters even worse, the person who docks and tries to enter the satellite is none other than... Charlie Hardie!

So the story sets out with Charlie Hardie and The Other Charlie Hardie, both with their own agendas, preparing for an epic battle and a heroic journey that takes them, of all places, back home.

Swierczynski deals with having two Charlie Hardies in an interesting way. He writes Charlie Hardie (original) in third person omniscient, and The Other Charlie Hardie in second person. This is particularly well executed, and leaves the reader with a seamless transition between two of the (seemingly) same yet inherently contradictory viewpoints. At the very least, the reader, whether a newcomer to the series (like your's truly!) or a seasoned veteran, always knows which point of view is being discussed.

Still, I found the whole notion of two Charlie Hardies to be way too contrived. The Other Charlie Hardie was modified to look like Charlie Hardie so that he could board the satellite, which is designed only to recognize Charlie Hardie. But one would think that the Cabal would have installed technologies sophisticated enough to recognize the fact that these two people do not share the same genetic code, physiological attributes, heartbeat, patterns of breathing, et cetera. Why was it even necessary to look like Charlie Hardie in the first place? Whatever the case, this set forth a chain of events that had me, from time to time, smacking my forehead in disbelief. Why, Duane, why? Maybe I'd know if I had read the first two books?

Making matters worse, why in the world was Charlie Hardie sent up in the satellite to begin with? It makes very little sense, even after I disabled my critical faculties. If something the Cabal owns needs protecting, then Charlie Hardie seems like the very last person you would want to act as guard dog. Hardie has a knack for being in the wrong place at the wrong time. This is what makes him a great character for adventure-thrillers.

I never felt invested in the characters or the storyline. Granted, Hardie (the original), the jaded superhero, is charming in his own gruff, ill-natured way. But none of the other characters were able to draw me in. Nonetheless, I must admit that Swierczynski has a knack for quick, engaging, and easy prose. Point and Shoot is thus a real pageturner. So while I did not find myself drawn into the story, I still enjoyed the ride.

And, just in case you find yourself reading Point and Shoot and wondering whether to quit, the last fifty pages really pick up, taking the story to a new level. The climax is fantastic, and Swierczynski ends on a teaser that hints at possible wonders to come. Perhaps that teaser would have had a more powerful effect on me had I read books one and two...

Bonuses: +1 for the interesting use of second person.

Penalties: -1 for The Other Charlie Hardie; -1 for pretty much everything to do with the satellite.

[Read about our non-inflated scoring system here]
Posted by Jemmy at 12:00:00 AM