I suppose that while I was growing up, sci-fi and fantasy were similar to heavy metal. In high school, I self-identified as a punk (though I dressed like a skater, being a skater and all) and in those days one could either listen to punk or metal, never both. I guess it was the same with sci-fi. I preferred horror and hardboiled crime fiction. Some sci fi got through, mainly Philip K. Dick, whose work I was enthralled by thanks to Dustin Long. (Check out his debut novel Icelander. Today.) The G has had an influence on me on me in recent years, recommending that I read Song of Ice and Fire and Ian M. Banks’ oeuvre, as well as The Book of the New Sun, which I never finished. Hence it's on the list.

5. Feast for Crows and Dance with Dragons (alternative reading order)
Why would I put myself through this again? Fortunately, I didn’t get into Martin’s opus until about three years ago. I didn’t have to suffer through years of waiting for the underwhelming Book 5 after being blindsided by the crappiness of Book 4. I didn't go through what my friends went through. But, like them, I truly dislike the last installment. A friend of mine suggested I reread these according to an alternative chapter order floating around the internet. And why not? Probably because the TV series has replaced the novels in terms of importance to me. That is, until Book 6 comes out.

Odds that I will actually begin the books: 100% (I started two weeks ago)

Odds that I will finish: 10% (HBO will eventually get to these books and hopefully do a better job than Martin did)

4. A Few William Gibson Novels
Specifically Pattern Recognition, Spook Country, and Zero History. I have tried twice in my life to read Nueromancer, found it boring and pretentious, so I’m not going to do that again. After all, it’s the Die Hard of cyberpunk. I believe on one of my attempts I got 40 pages into the book. But, as I recall, it was boring. Years ago I read Pattern Recognition—an airport purchase—and rather enjoyed it. But the main reason I may—and throughout this post, assume a “may”—is because he’s the favorite author of a very good friend of mine who has for years recommend that I read Gibson. Last week he recommended these three novels. Then he gave me his copies. The fact that I left them on his front porch perhaps doesn’t bode well vis-à-vis actually reading them.

Odds that I will finish: 35% (For no other reason than low self-expectations)

3. The Black Company
Sometimes a title alone can pull you in. I really can’t same much more than that, other than it’s supposed to be about militarism, a topic I am quite familiar with in my other life. But I bought this one, with hard earned cash no less. The only thing that may keep me from reading this is the possibility that I'll want to read the entire series. Ain't nobody got time for that. I have a PhD to finish.

Odds that I will begin this: 65% (Mainly because I actually bought this book)

Odds that I will finish (n/a: I bought this after reading a brief synopsis of it. I’ll be able to tell by page 20)

2. John Dies at the End
Not only did I buy this novel, I began reading it already. One hundred pages in and it’s funny, weird, maybe it tries a bit too hard—which may be why I stopped reading it a few weeks ago. That and grading, writing, research, cowboy poetry festivals, etc. I was in Europe when the movie came out, so I missed out on any hype (assuming there was hype) surrounding its release. But a friend, the same from #5, recommended it. And since he reads whichever comics I send his way, reciprocity demands that I read one of the books he recommends.

Odds that I will begin this book: 100% (I started it three weeks ago)

Odds that I will finish it: 3% (I want to, but the fact that I stopped reading it two weeks ago doesn’t bode well) 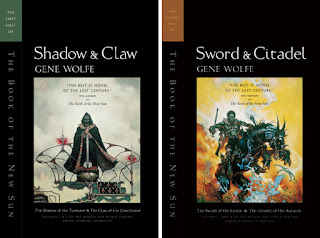 1. Book of the New Sun
I read books one and two three years ago and, despite it being a slow, Dostoevskyian process, I really enjoyed reading these novels. Gene Wolfe is simply a masterful author, or at least one who requires a level of labor on the part of his reader to evoke obsession and wonder. Then I started the second book. I recall more of the same: Sevarian wandering. And I vaguely recall him wandering some more. And then I left for Europe. Though I read a good number of novels during my year away, the second collection was not among them. Anticipating a post-GoT depression, I begun reading The New Sun series again last week. One hundred and eleven pages in and I am fairly confident that I’ll finish—assuming I can get through the Botanical Garden bit once again.