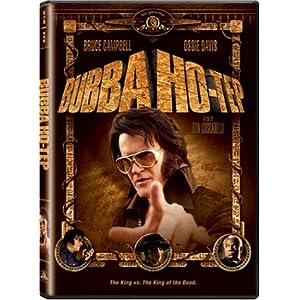 The Meat
Two realizations about this movie recently struck me:
Bubba Ho-Tep is the story of a geriatric Elvis Presley, confined to a Texas nursing home that he shares with JFK, who was dyed black and hidden away after the failed 1963 assassination attempt in Dallas. Bummer for them that an ancient Egyptian mummy is roaming the halls of the convalescent home, sucking the souls of the elderly out of their buttholes.

Go ahead and read that again. Because despite the previous paragraph, this move is legitimately very, very good.

We all know movies rely on a willing suspension of disbelief. But Bubba Ho-Tep almost invites you to *not* suspend disbelief, and just see how far you can make it. Bruce Campbell has never been better, and Ossie Davis was a titan of acting, so by the time these two characters pause to talk about the pain of being absent fathers before heading out with their wheelchair and walker to battle a 5,000-year-old soul-sucking mummy...well, dang it, you're going to believe them and you won't be able to help it.

And personally, I like to think that I had a part to play in Bubba Ho-Tep's success. It was made independently without any distribution deal in place, so when it was finished director Don "Phantasm" Coscarelli and Bruce Campbell took it out themselves, setting up roadshow dates all over the country. A few weeks after I saw one of its roadshow engagements in Houston with Bruce Campbell in attendance, I was at the Austin Film Festival, where I met an acquisitions guy for MGM. I raved to him about Bubba Ho-Tep, which he had not heard of, and told him they had to give this thing a look. When the movie finally came out on DVD, it was MGM who distributed it. Coincidence...? (Probably.)

The Math
Objective Quality: 7/10, high production value, but definitely constrained by its budget

Bonuses: +1 for Bruce Campbell and Ossie Davis' performances; +1 for the balls to actually make a movie about (see paragraph #1, above); +1 for comparing a giant scarab beetle to a peanut-butter-and-banana sandwich

Penalties: -1 for the unnecessary penile affliction Elvis suffers from (couldn't he have just had a goiter or something)

Cult Value Coefficient: 9/10. Yep. Because JFK didn't die. He was dyed black. And hidden in Texas. This whole time. And fought a mummy. With Elvis.

[See explanation of our non-inflated scores here.]
Posted by vkotrla at 10:29:00 AM