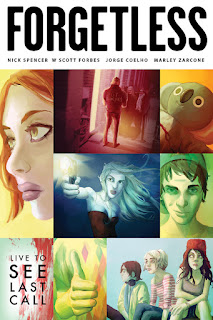 Forgetless is a rather unmemorable book. There. I got that out of my system.

The comic, written by Nick Spencer (Morning Glories, T.H.U.N.D.E.R. Agents), is basically a pitch in need of development. “Models moonlighting as contract killers, an idiot YouTube star, and a douchebag in a koala costume! Think Pulp Fiction meets American Pie.” Actually that’s the plot to “Live to See Last Call,” one of two stories comprising Forgetless. “Live to See Last Call” is heir to the crime films and Vertigo comics of the nineties: non-linear storytelling, cute girls with guns, and gross-out sex à la Garth Ennis. I am not opposed to these things as a rule, but Forgetless just reminded me how tired such devices are.  The sophomoric, dialog was a bit too Kevin Smith, particularly coming from the female leads. (Dick jokes are never really funny.) I did enjoy Spencer's clever use of Twitter, YouTube, and Craiglist as narrative devices in Forgetless, though alone they could not sustain the thin plot of "Live to See Last Call."

The book's second story, “Contributing to the Delinquency of Minors,” has even less to offer. What begins seemingly as a charming homage to Stray Bullets, ends as an episode of whatever show Demi Lovato is on. More dick jokes, but in Juno's voice. This is a shame because Marley Zarcone (Black Circle) was the best thing about Forgetless. In contrast to the stylized art of W. Scott Forbes and Jorge Coehlo on "Last Call," Zarcone’s subtle pencils evoked the work of Paul Pope and David Lapham. Yes, nineties again. But this time in a good way.

Had Spencer ditched the dick jokes and focused on models-with-guns, this  could been an entertaining read. Had Marley Zarcone drawn it, this book could have even been good. Her subdued and delicate pencil-work would have soften the rough edges of "Live to Last Call." As it stands the book reads like a throwaway project from a successful writer.

Perhaps, I am being too harsh in my criticism. As a teenager, I might have even enjoyed Forgetless. Then again, I was a teenager in the nineties.

Bonuses: +1 for cute girls with guns.

Penalties: -1 for making me miss the nineties.

[See explanation of our non-inflated scores here.]
Posted by Philippe Duhart at 3:53:00 AM