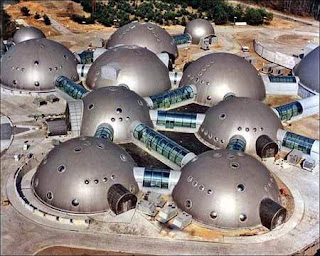 Ever wondered what it would be like to live on the moon? What it would take to actually live there and, you know, not starve or be held hostage to supplies from Earth? Well, a group of scientists mapped out what a sustainable lunar colony could look like. They call it Luna Gaia. Here are their six steps to sustainable moon living:


FIND A BIG CRATER Designs call for Luna Gaia to be built in a mile-wide crater near the moon's north pole. The crater wall casts a shadow that protects the astronauts from solar radiation.

GO SOLAR A dozen mirrors, each 100 feet wide, sit on top of the crater's rim, an area that's nearly constantly bathed in sunlight. These direct light onto another set of mirrors that focus the beam on a water supply, creating steam that drives a turbine and generates electricity for the base.

INFLATE YOUR BEDROOM Luna Gaia will consist of several inflatable modules made of Vectran, a flexible material that's more durable than Kevlar and can be compressed in transit to help keep delivery costs down. The greenhouses will be transparent, but living quarters will be covered with a layer of regolith, or lunar soil, to provide added protection from radiation.

GO FISHING Tilapia are high in protein and thrive in a crowded tank. Astronauts will also dine on hydroponically grown wheat and a variety of vegetables, such as spinach and potatoes. The same algae that cleans up the crew's water will be a good source of protein.

URINATE OFTEN Urine runs first through an ion-exchange filter that removes some contaminants and then into the algae tanks, where the algae drink it up and release water vapor that a condenser liquifies. This water either runs back to the crew quarters for washing or is further purified to make it drinkable.

REUSE EVERYTHING Several different strains of bacteria break down feces into water, minerals and ammonium. These materials are converted into nutrient-rich fertilizer and pumped into the plant, fish and algae chambers.

Washing down endless meals of tilapia with urine-derived water doesn't exactly sound too appealing, but you've got to figure the kind of people who'd actually be stationed on Luna Gaia are already used to freeze-dried meals and astronaut ice cream. So maybe this is a step up? Popsci has a nifty animation explaining Luna Gaia's architecture here.
Posted by The G at 7:56:00 AM