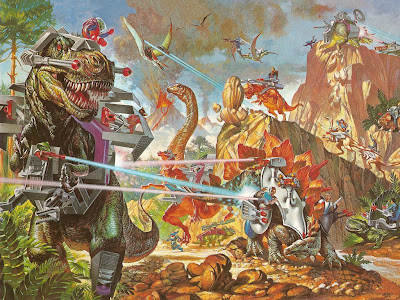 Noted Columbia University chemist Ronald Breslow recently deviated from the accepted parameters of academic discourse by writing something the media actually paid attention to.  That is, at the end of a long and--presumably--dry paper about amino acids and such, Dr. Breslow informed us that there may be alien worlds out there populated by giant, super-smart Pterodactyls and T-Rexes.

Is Dr. Breslow actually claiming these alien dinosaurs exist, or better yet, that they're actually on the way to conquer Earth as we speak?  Unfortunately not.   But I like to think these alien dinosaurs are smarter than we are, and as such, probably deployed Dr. Breslow in an ingenious double-bluff to catch us napping. In fact, they may be on the way here as we speak.  They probably also wear lasers on their backs and talk sassy.