If you are reading this in the morning then there is still time to help Cullen Bunn's latest kickstarter fund.  A Passage in Black is a horror anthology that sounds amazing and is under $1,000 from funding at the current time I am hammering away on my keyboard. Regardless of if it is funded or not by the time this posts, you should check it out and support an amazing looking project. 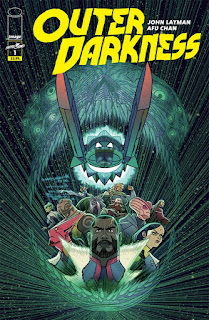 Pick of the Week:
Outer Darkness #1 - I am not sure what the hell I just read, but I enjoyed it and am looking forward to the second issue. John Layman is sticking with his biblical themes and is bringing the reader in to the Outer Darkness of space where there may or may not be the gnashing of teeth. Disgraced captain Joshua Rigg is forced back into the military service where he is leading a mission to retrieve something from the Outer Darkness. In my favorite scene in the book, Rigg is forced to feed the demon that powers the god engine in the ship a trio of criminals. One of the criminals pleases him and he has her reassigned as ensign as her skill set may come in handy.  I am very intrigued by this book and curious to see the role that gods and ghosts will play in this wild science fiction tale.

The Rest:
Dead Rabbit #2 - Now that Dead Rabbit is officially out of retirement, he recruits his old wheel man to help him with at least one score. With his wife's medical bills stacking up and little time to properly plan a job, Dead Rabbit decides to hit a bank he robbed 20 years prior. The terror on the bank manager's face tells us all we need to know about his reputation prior to his first retirement. The only problem with bringing in additional people to help you with your score is that you open up new pathways into anyone who wants to bring you down. I think Dead Rabbit is about to quickly learn why you don't want to upset people like Don Digirolamo.

Leviathan #3 - A comic about the biblical beast Leviathan penned by Layman and illustrated by Nick Pitarra is the hilariously entertaining gory mess that you would expect it to be. This issue brings in a priest who confronted Leviathan many years ago (in a nursery featuring Harry and the Henderson art on the wall!) and is fully aware of the threat that has been summoned by Goth Jimmy. This series has been a complete trip and is well worth your time and energy. Layman also doesn't hold back with his jabs at the current administration.

Star Wars Adventures: Destroyer Down #1 - Breaking from the Adventures mold a bit, this is a complete mini-series that tells the reader about a famous Star Destroyer from two different perspectives. One perspective is its life on Jakku, while the other is when it was in active duty for the Empire. On Jakku it is a fabled ship that was part of a legend and nothing more. A sand storm uncovers the supposedly haunted vessel and there is a race to salvage parts from the beast. I am down for any story that sheds more light on Rey and am enjoying a story in two different eras of the Star Wars universe that are intertwined.  Very excited to see where this is heading.