I hope you all had a wonderful and spooky Halloween and were able to hand out a lot of comics to your trick-or-treaters!  In honor of the holiday this edition of TMS will focus on a special issue of Wytches that debuted yesterday. It has been quite some time since we have had any Wytches material, but Scott Snyder said that we can expect two arcs in 2019 and that this one-shot serves as a prequel to the first arc and introduces us to a new character who will play a bigger role in 2019. 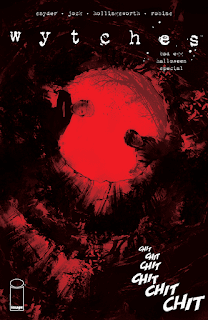 Wytches: Bad egg Halloween special - Wytches are creatures that have been around for centuries. It is not known if they are unique creatures of their own or are genetic mutations of humans. They live underground in burrows and feed on human flesh. They thrive with the help of humans who incubate their young in holes in the ground in exchange for tinctures that can cure disease and offer other benefits.

Sebastian learns early on that his parents are part of a group called Irons, who have been attempting to stop the wytches for generations. His mom specializes in younger wytches and his dad specializes in the old wytches that are burrowed deep beneath the earth.

This story thrives because of the relationships that Snyder develops. In order for horror to be effective you have to care about the characters and feel genuine concern for their well being. Snyder hits the nail on the head as we see the story through the eyes of a child trying to make sense to the world in which he is born. It is hard enough on a kid when you are the new person at school, but for Sebastian, this is a common occurrence due to the lifestyle of members of the Irons.

This one-shot focuses on a brief stint in a small town in the Midwest in which Sebastian develops a bond with the kid next door despite instructions not to make friends. At moments this book feels whimsical due to the friendship the two possess, but we are frequently reminded of the horror in which they dwell.

Co-created by the extremely talented Jock, I can't think of an artist more appropriate to set the mood in this series. One of the scariest elements of the wtches is that Jock never gives you a clear glimpse of what they look like. Not knowing and seeing the reaction of the kids when they first see them is what makes this book genuinely creepy.

After reading this one-shot I am very excited about the prospects of returning to this series in 2019. This has always been a very personal story from Snyder and you can sense the care he puts into the narration.  Hope you all had a happy Halloween!