We lost a legend earlier this week in the passing of Stan Lee. As someone who got into comics at an older age, I didn't appreciate fully what impact Lee had until I started reading older Marvel comics. Lee, along with Jack Kirby, Steve Ditko, and others, provided the foundation for superhero comics that remains in place today.

It is mind boggling that his creative efforts gifted us Spider-Man, The Incredible Hulk, The X-Men, Black Panther, and The Avengers just to name a few. Despite the impact that he had, Lee still maintained his quirkiness and is one of the most endearing creators I've ever seen. From his silly cameos in the Marvel Cinematic Universe films, to the way he interacted with his fans at conventions. There was only one Stan Lee and the comic book industry is a little darker for having lost him.

A central theme in Lee's work is that of social justice and inclusion. Most of his characters were activists who were rampaging against what he considered the evils that were permeating society. Asked about the X-Men, Lee said "I wanted them to be diverse. The whole underlying principle of the X-Men was to try to be an anti-bigotry story to show there's good in every person".

The impact of creating characters like Black Panther is detailed in an incredibly personal account that you should read by Jason Johnson.  Marvel initially had concerns that Black Panther would be affiliated with the political movement that shared the name. Lee fought for Black Panther to keep his name and his fight to make comics diverse brought new fans to comics and provided a much needed release for people that yearned for an escape.

Lee penned a monthly column entitled "Stan's Soapbox" and this entry from 1968 sums up what Lee meant to the comic book industry and how he created an empire built on celebrating diversity, understanding one another, and tolerance. 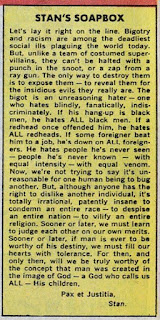 "Let's lay it right on the line. Bigotry and racism are among the deadliest social ills plaguing the world today. But, unlike a team of costumed super-villains, they can't be halted with a punch in the snoot, or a zap from a ray gun. The only way to destroy them is to expose them - to reveal them for the insidious evils they really are. The bigot is an unreasoning hate - one who hates blindly, fanatically, indiscriminately. If his hang-up is black me, he hates ALL black men. If a redhead once offended him, he hates ALL redheads. If some foreigner beat him to a job, he's down on ALL foreigners. He hates people he's never seen - people he's never know - with equal venom. Now, we're not trying to say it's unreasonable for one human being to bug another. But, although anyone has the right to dislike another individual, it's totally irrational, patently insane to condemn an entire race - to despise an entire nation - to vilify an entire religion. Sooner or later, we must learn to judge each other on our own merits. Sooner or later, if man is ever to be worthy of his destiny, we must fill our hearts with tolerance. For then, and only then, will we be truly worthy of the concept that man was created in the image of God - a God who calls us ALL - His children. Pax et Justitia." - Stan