One might have been forgiven, in 1966, for thinking, "Welp, that's the end of Frankenstein, right there." It was in that year, you see, that the world got Jesse James Meets Frankenstein's Daughter. In this, um, "movie," notorious outlaw Jesse James escapes down to Mexico, where the only doctor in town, and the inhabitant of the ancient castle in the village — you know, one of those great ancient, European-style castles that tiny Mexican villages are always known for — is Doctor Frankenstein's granddaughter. Not daughter, but that's the least of our worries. Jesse's traveling with his only surviving gang member, Hank, who's hurt. When Maria Frankenstein, the "doctor," sends Jesse out into the village to get medicine for Hank, she takes the opportunity to chop out Hank's brain, give him a new one, and turn him into a beefy kill-machine. Even when compared to its awful, awful companion film Billy the Kid Versus Dracula, produced by the same company in the same year, this movie is stunningly incompetent. Words simply fail.

If it were a piece of literature or a cultural icon any less durable than Mary Shelley's Frankenstein, it would have seemed like the gas tank was entirely empty at that point. The book was 150 years old, after all, and James Whale's iconic films were both over thirty years old, and had been followed by over a decade's worth of increasingly dubious sequels and spin-offs that saw Frankenstein's monster paired with several members of the Frankenstein family tree, the Wolfman a few times, Dracula, Abbott and Costello, and...at some point, who could even keep track? So when you've got fly-by-night, drive-in movie producers putting Frankenstein's heirs in the Old West, it would sure seem like the creative well was dry, and the world might have had its fill of Frankenstein movies.

You may recall Harry Potter Daniel Radcliffe's recent turn in Victor Frankenstein. Or you might recall the stage play Frankenstein with Sherlock Holmes Benedict Cumberbatch and Johnny Lee Miller. Or, unfortunate soul, you may recall the film I, Frankenstein in which the creature gets caught up in the, um, ancient war between...*checks notes*...I guess gargoyles and demons? And there were in the 1990s Roger Corman's Frankenstein Unbound, which featured time travel, and Kenneth Branagh's Mary Shelley's Frankenstein, which featured Branagh and Academy Award-winning screen icon Robert DeNiro wrestling naked in some type of amniotic goo. The point is, if the world should one day tire of reincarnating Mary Shelley's creature, it will be a long, long time hence. 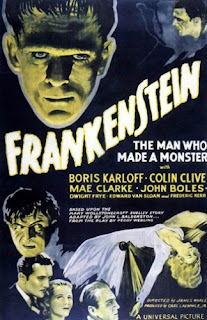 But Shelley's work has invited re-interpretation ever since its original publication 200 years ago — even by Shelley herself. The book first achieved prominence not upon its initial, anonymous publication, but upon its first adaptation to the stage, in 1823. The success of the stage play led to the publication of the second edition of the novel that same year, and the first time Mary Shelley was credited as the author. In 1831, Shelley herself radically altered the text, and published a new version of the book, which takes much of the blame for the events in the novel away from Victor Frankenstein and attributes it rather to fate. There is something primal in Shelley's story, something fundamental that has found continued resonance with the human spirit even through the seismic upheavals in culture, society, and technology that have taken place over the last two centuries.


Did I request thee, Maker, from my clay
To mould me Man, did I solicit thee
From darkness to promote me?

Guillermo del Toro has called Frankenstein the ultimate teenage novel, a book forever echoing familiar adolescent feelings like, "I didn't ask to be born," and "How can the people who gave me life not understand me at all?" That is an apt observation, and almost certainly contributes to the book's longevity. And it can't be ignored that Shelley wrote the novel when she was a teenager, herself. But baked into del Toro's observation is a perspective, and it is the Creature's. Del Toro's implicitly suggesting that the reader does and should identify with the Creature, and it is the "monster" who is the point-of-view character. I feel the same way, which is something I discussed in the first installment of this series.

But I also feel that the lessons of the novel, or the cautions and warnings baked into it, extend far beyond one's adolescence and are lessons we must continually re-examine and re-visit on a societal level, specifically because of the cultural and technological upheavals that have led from Shelley's youth to our present. We have accrued greater power over life and death than ever could have been imagined in even the most outlandish speculations of 1818. The casualties of World War I 100 years later could scarcely have been imagined, let alone the notion that organ transplants would one day become routine medical practice. The "horror" of Shelley's imaginings — pillaging corpses for their organs to put into another body — has now saved countless lives. And, unless I am consumed by flame and if I die with my driver's license on me, one day part of me will live on in someone else. Hopefully it's a good part...

As long as humankind is faced with the question of "Though we can do this thing, should we do this thing?" I believe Frankenstein will stay with us, constantly re-invented and re-imagined for our times and our contemporary struggles. And, sure, for crappy movies here and there that are just trying to get mileage from the name. But Mary Shelley seemed to believe that Victor Frankenstein was the guilty party, and his creation Frankenstein's first victim. That's how I read it, anyway, sitting here 200 years later. And that remains instructive. What are the ramifications of our decisions? Our technologies? Our innovations? What might the human cost be? What constitutes "acceptable losses" in the pursuit of knowledge?

But maybe none of this applies to you. I doubt it applies to me. I am neither a creator of technologies nor a wielder of great power. So the thing that I take away from Frankenstein, and the thing that maybe we all need to be reminded of more than anything else, is that those who are different from us are no less human, and we all, in fact, have an obligation to one another. This is not, I think, a lesson we will ever fully learn, and if we need Mary Shelley's Creature to remind us of this from time to time, then long may he live.

Published by Vance K — co-editor and cult film reviewer for nerds of a feather, flock together since 2012, songwriter, and longtime Franken-fan.
Posted by vkotrla at 12:00:00 AM