This Ain't Your Daddy's Review 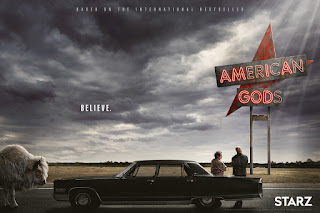 For someone who writes every spare moment he gets, sings (poorly), and plays music (slightly less poorly), and is that guy who breaks down every stupid detail of a movie, there are some forms of art I just don't get. I went to an art museum recently, which all those things I just listed are, and it had an ostensibly moving exhibit of portraiture. They were pictures, of people, but to spruce the joint up, they put little plaques with words next to them. Now, this is me, but one hundred times out of one hundred, if you put a picture and a set of words next to each other, I am taking the words.

Not that the pictures were bad. The person who took/painted/whatever them just thought they were way better than I did. To a person, the words said they were going to change the world with their portrait.

To date, this has not happened.

All of this is to say, I am frequently out in left field when it comes to art appreciation. So it is that I find the television adaption of American Gods quite refreshing. Not because it is the greatest show ever- it might be, who knows, and if I think it is, that means most of you hate it and vice versa- but I wanted to use this space to appreciate some of the details of it, details which make it a good piece of art, two episodes in.

Consider this your spoiler warning. 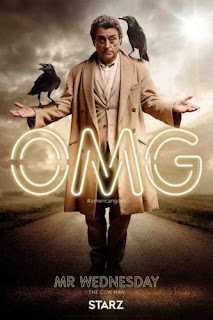 Narration sucks. The vast, vast majority of the time it is stupid, and redundant. So opening with it didn't exactly fill me with optimism, but that quickly passes. It gives way to something else, though, which is a tough thing to execute, namely, curiosity.

If you boil the first couple episodes down, the beats are... infrequent. But that's what happens when you have to set up a world. But what must be done is to keep interest up, and Gods does this in spades. It teases well, by virtue of Shadow Moon, who is just as - possibly more- lost as us. For every piece that is revealed, two questions seem to pop up, and e (at least, I) really want to know the answer.

My other complaint about a lot of things- Harry Potter, anything vampires or werewolves, etc- is the 'hidden world' motif, which is to say, some world that exists with ours and the story bends itself backwards to justify why these creatures are secret.

American Gods doesn't really have time for that. Two hours in, and, basically, it just doesn't address it. It doesn't ignore it, exactly, but it just presents it as this is the way it is. Note to writers: This is way better. Without going into the book, and letting the show speak for itself, I love this handling of it, because it feels immersive. We just get to go along for the ride without a convoluted explanation pulling us out of it.

Finally, for a show about gods and secret worlds, this show does a really good job of having human moments. Shadow, for a hunky slab of man with a limited number of tones and facial expressions, is incredibly sympathetic. As a character, his job is basically not to get in our way and give us emotions to identify with, and this is done very well. The moments- so far- I have been most invested in the show are moments that deal with his (past) life and revelations about it.

It's early yet, obviously, so this could all come apart, but details like this give me a lot of hope going forward. That casting, incidentally, is pretty spot on. Ian McShane is vastly underrated and completely disappears into this role. A few moments of weak CGI and the occasional dull spot, American Gods is shaping up to be an amazing series.

(Note: I focused purely on the TV series, if you would like a review of the book, Tia did that)