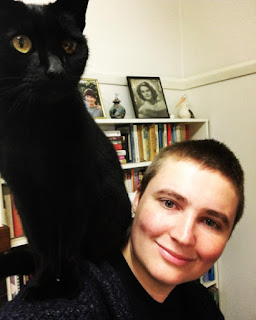 Foz Meadows is an Australian fantasy author, reviewer, poet and blogger. She has previously published An Accident of Stars, an epic portal fantasy from Angry Robot, and Coral Bones, a Shakespearean novella; she has also written two YA urban fantasy novels, Solace and Grief and The Key to Starveldt. Foz is a reviewer for Strange Horizons and a contributing writer for The Huffington Post and Black Gate; her essays have appeared in various venues online, including The Mary Sue, A Dribble Of Ink and The Book Smugglers. In 2014 and 2017 she was nominated for a Hugo Award for Best Fan Writer; she has also been nominated for the Ditmar for Best Fan Writer in 2014 and 2016.

There’s a lot of sequels I’m desperate to sink my teeth into, but I’m particularly looking forward to Raven Stratagem by Yoon Ha Lee, The Harbours of the Sun by Martha Wells, and Buried Heart by Kate Elliott.

At any given moment, I exist in a state of wanting to reread Katherine Addison’s The Goblin Emperor, which is firmly on my list of all-time favourite books. Right now, though, I also want to reread Neil Gaiman’s American Gods and the Sandman series; I’ve been meaning to revisit the latter especially for years!

Growing up, one of my favourite and most influential authors was Sara Douglass. I reread her first two trilogies easily ten times and devoured her new releases. Now, though – and as much as I continue to owe her writing an enormous debt; hers were the first true epic fantasy novels I ever read, the ones that properly brought me into the genre – I’m retroactively horrified by the amount of rape and abuse her stories both contain and, contextually, excuse, to say nothing of the various racist stereotypes that crop up within them. Let’s just say that, if I discovered her work as the adult I am now, I’d probably have flung the first book at the wall and never picked up another one, and yet it’s a paradoxical admission, because I wouldn’t be that adult if I hadn’t read her books. Such is the weird inevitability of ageing.

I’m going to cheat slightly here and give two answers: Kipling’s Jungle Books – there’s two, as I delightedly discovered in my teens, and all the poems and stories therein are engraved on my heart forever – and the Redwall series by Brian Jacques, which was and is a beloved cornerstone of my fantastical development. Eulalia!

My latest novel is A Tyranny of Queens, the sequel to An Accident of Stars. It’s a portal fantasy about the consequences of portal fantasies: what happens when you come home, and how do you deal with the aftermath? It contains some of the most vividly personal scenes I’ve ever written, and I’m unbelievably excited to see what people make of the finished product.