Microreview [book]: Son of the Black Sword, by Larry Correia 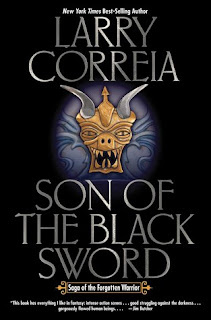 After tackling urban fantasies set in the present and in the 1930's, as well as a modern day military thriller, Larry Correia takes a whack at epic fantasy with Son of the Black Sword, the first volume in the Saga of the Forgotten Warrior.

What Correia appears to be doing with Son of the Black Sword is not quite as apparent in the early going, and while he is laying the groundwork for the back half of the novel, readers who are looking for something more than ass kicking fight scenes and buckets of blood may check out before the payoff and the character development.

Ashok Vadal is the epitome of a Protector, an elite warrior tasked with enforcing The Law. The capitalization here is important because in this world, at this time, The Law is everything. It has moved beyond simple legal strictures to become the absolute foundation of this land and Ashok is so perfectly a Protector and so perfectly an enforcer of the law that he might as well be a robot. To Ashok, an individual is either in compliance with the law or he is not. There are no in betweens. There are no grey areas. So, when Ashok learns that, unknowingly, his entire life has been in violation of The Law, he turns himself in for execution.

Somewhere I hear Sean Connery yelling "The Law will judge you!"

Of course, The Law (or the law) is not some perfect thing and throughout the novel various characters point out to Ashok atrocities done in the name of The Law. At the same time, we also see individuals in the ruling caste actively working to subvert The Law to their own ends. We might guess where this could possibly end.

Looking to shake the foundations of the characters as well as the world, Correia is not interested in maintaining the status quo for anyone or anything. As wooden as some of the early characterization comes across and as so over the top the moral code of The Law is, Correia lays the groundwork for the culture he is (almost certainly) going to overturn in future volumes of this series. The only problem is that we have to get through the first quarter of the novel to actually see this begin to take shape.

The Son of the Black Sword is a Larry Correia novel, and anyone who is at all passingly familiar with Correia's fiction will know to expect action sequences as lovingly choreographed as a ballet of violence. Correia delivers this in what feels like geysers of blood and missing limbs.

I am not the intended audience for this book.

The audience that loves balls to the wall action mixed with sorcery, a magic sword, and the occasional twist and turn to the plot while not really caring that the prose is just good enough to get the job done but not good enough to shine will love this.

My problem is that Son of the Black Sword, despite a November 2015 publication date, feels like a throwback to the epic fantasies of the 1980's or early 1990's where there is a greater sense of black and white and obviousness to both the writing as well as the storytelling.

To that point, Son of the Black Sword is reminiscent of James Barclay's Chronicles of the Raven, a series I've described as being a bridge between the fantasies of the 1980's and those of the 2000's, except almost everything that Correia does here, Barclay does so much better.  The reason I mention Barclay is because had Son of the Black Sword been published even twenty years ago, I might view Correia's novel as one of those "Bridge" novels straddling the line between two eras of fantasy fiction. It's just that (despite my love of awards) even though fiction is not a competition, I've somehow linked Son of the Black Sword with Barclay's Raven novels in my head and, at least for me, Correia's novel doesn't measure up.

With that said, I do think that fans of Correia's fiction would and absolutely love Barclay's Dawnthief and should give it a shot.

Also - about that magic sword. With the title "Son of the Black Sword", one imagines that Correia is partly giving a nod to Michael Moorcock's Song of the Black Sword with Elric and his ever thirsty for blood black sword Stormbringer.  In Son of the Black Sword we have Ashok and his magical semi-sentient sword Angruvadal, a sword which will kill the wielder if it deems that the person holding it is not worthy.

Larry Correia has done a remarkable thing with Son of the Black Sword. Despite my really not being the audience for the novel, and despite the issues I had with it, after persevering through the opening chapters and having a pretty solid idea of exactly where the novel was going I still wanted to continue on that journey. I wanted to know how this was going to end up even though I pretty much knew.  Despite not at all being enthusiastic about Son of the Black Sword, I still want to know what happens in the next book. I'm not sure I care what happens to Ashok, but I'd like to know exactly how The Law is taken down in future volumes and how the demon hordes that have ruled the waters and threatened the land for millenia might be truly combated. I didn't love this book and I wouldn't recommend it, but I still want to know what happens next.

Bonuses: +1 for the fight sequences. Correia writes the hell out of armed conflict, +1 for Rada the librarian, a character I'd love to see have her own novel, +1 for somehow making me curious to read the next book just to find out how certain things resolve.

Penalties: -1 for being a 2015 novel that would have been better served being published thirty years ago, -1 for awfully wooden characterization, -1 for clunky writing.